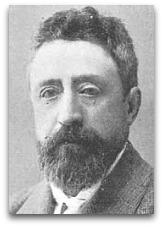 In hmolscience, Enrique Serrano Fatigati (1845-1918) (CR:9) (SN:28), Enrique Serrano, Enrique Fatigati (most common), Enrique Serrano-Fatigati, or Enrique Serrano y Fatigati (Spanish), referred to as "Serrano" by Stefan Pohl-Valero (2009), was Spanish physicist, chemist, and thermodynamicist noted, in human thermodynamics, for his 1870s publications that attempted to outline a unified theory of nature and society centered on the first and second laws of thermodynamics, particularly: William Thomson's "On a Universal Tendency to the Dissipation of Mechanical Energy" (1852), William Rankine’s versions as described in his “Outlines of the Science of Energetics” (1855), mixed with a blend of ideas about Pierre Laplace’s nebular hypothesis, Lamarckian evolution theory, and Friedrich Schelling's 1798 "world soul" theory, concluding that the universe as a whole is in a sort of organic evolution, while along the way replacing God and the soul with a type of transformative “natural energy” or “activity”.

Name | Enrique Serrano or Enrique Fatigati
In the Hispanic tradition, people usually have two last names. So in the case of Serrano, "Enrique" is his first name, and "Serrano" and "Fatigati" are his two last names. According to protocol, when used in context, referring to a person the first time, usually one is encouraged to write down the whole name (with the two last names) and subsequently use only the first last name.

Students
A modern student of Fatigati's work is Spanish mechanical engineer and social thermodynamic historian Stefan Pohl-Valero, who devoted much of his 2007 PhD dissertation to bring out some of Serrano-Fatigati's theories into modern daylight.

Life | Non-life issue
In 1870, Serrano began publishing his view on the origin of life that all material forms, from stars to man, are organized and based on the same chemical and dynamical grounds, in which there exists a “unity of constitution, phenomena, and a common origin, in the general progress of matter” and a “necessity law” that orders the series from simplest to more complicated forms. In 1874, these views were expanded into a booklet and from 1874 to 1881 he conducted some types of experiments, with light, temperature, and composition of culture media, to verify his views. Shown adjacent are the main works by Fatigati on his unified theory of natural evolution. (Ѻ)

Serrano, in his “The Activities of Nature” (“Las Actividades de la Naturaleza”), cited the ideas of Friedrich Schelling, his 1798 From the World Soul (Von der Weltseele), in particular, wherein nature is regarded as an organism, supposedly employing the ancient Stoic doctrine of a single soul pervading all of nature, upon which Serrano espoused a monistic world view that unified organic and non-organic, a theory that Stefan Pohl-Valero labels as a “thermodynamic evolution of the universe” theory. (Ѻ)

According to Serrano, there was no difference between inorganic and organic nature, life differentiated from the inorganic only in its higher organization. Thus, in Serrano’s view, all matter was organic and all matter had a soul or an internal, active force, conscious of itself, which directed its transformation.

Education
Serrano’s version of physics (organic energetics) was said to have been a bit at odds with both Catholic teachings and main stream physics based on the mechanical hypothesis, i.e. that heat was a form of motion. This was the reason, it is said, that his first submission in 1872 of his doctoral thesis in physics on calculating the specific heats of solids and liquids was rejected by the viva jury at the University of Madrid. After a revision, his second thesis in 1874 was accepted and he obtained his doctorate. [1]

Free Institution of Education
In 1875, the outset of the Bourbon Restoration began, all state teaching staff received instructions to follow Catholic dogma in their work, after which many including Serrano protested, some being stripped of their posts.

The following year, those who rebelled grouped together and founded the Free Institution of Education (Institucion Libre de Ensenana), a private educational institution, in Madrid, where freedom and secularization of scientific education was highlighted. The works of Serrano and British chemist Edmund Mills, who both were of the view that there should be no divide between living matter and inert matter, that the laws of energy were the starting point for both, and that this was the unifying model applicable for social values, became the standard physics taught at this new school. [2] Serrano’s energetics program, containing scientific and moral lessons, was taught at the institution.

In the 1880s, the energetics conception of nature was used by Serrano’s advocates, especially chemists Laureano Calderon and Jose Rodriquez Mourelo, to characterize society and the way it should be organized. [1]

“Organic character means that all matter has a soul—internal, active force conscious of itself—which directs its transformation. Some philosophers call this active principle ‘God’, I prefer to call it ‘natural energy’ or activity. The two laws of thermodynamics are the fundamental laws governing the universe.”

— Enrique Fatagati (1873), “The Progression of Matter”; translated and paraphrased by Stefan Pohl-Valero [3]