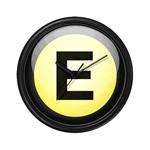 In human thermodynamics and thermodynamics humor, an entropy clock is a hypthetical device that measures the one-way flow of time. [1] In 1925 English astronomer Arthur Eddington suggested that there might be an entropy-clock in brain that coordinates or mediates the conscious feeling of time's arrow via an entropy-gradient. [2]

Design of
A typical entropy clock, according to Eddington, could be designed by an electric circuit composed of two different metals with their two junctions embedded respectively in a hot and cold body in contact. The circuit would contain a galvanometer which constitutes the dial of the entropy clock. The thermoelectric current in the circuit is proportional to the difference of temperature of the two bodies. As such, according Eddington, the shuffling of energy between the two bodies would proceed, the temperature difference would then decrease, and the galvanometer reading would continually decrease. This clock, as Eddington argues, would infallibly tell an observer from another world which of two events is the later. [2]