“Clausius coined the term entropy, from the Greek tropos, or transformation.”

The above quote by American scholar Eric Zencey, who did his PhD dissertation on entropy as a root metaphor, in the social sciences, gives a well-representative synopsis of the etymology of entropy; the Greek term "τροπη", however, to clarify, has the following alternative meanings, namely "turn" or "change": [11]

The exact meaning behind Clausius' use of the term "transformation" is in the sense of:

or the transformation of heat into work or work into heat as defined by the mechanical equivalent of heat.

There were, however, a number of precursory terms and phrases used by Clausius in the preceding fifteen years, such as diagrammed above, to define this quantity. In addition, there are to be found propagated in the literature a number synonyms and false etymologies. Both topic areas are discussed below.

Heat | History
The roots of the mathematical concept of entropy have its roots in the various historical models of heat: caloric, matter of fire, phlogiston, terra pinguis, sulphur model of heat, among others. To construct the quantity entropy, conceived as a state function, i.e. to transform the conception of a quantity of heat—conceived by Antoine Lavoisier previously as an indestructible fluid like particle called “caloric” (a theory disproved via Benjamin Thompson's 1798 cannon boring experiment)—Clausius employed the Euler reciprocity relation, whereby he used William Thomson’s absolute temperature (1854) scale T as the integrating factor for the differential (inexact differential) of a unit or quantity of heat Q, to make a new state variable function for heat: dQ/T (exact differential) which he came to call entropy.

Precursory etymologies
German physicist Rudolf Clausius, between 1850 and 1865, used the following phrasings and terminologies to define his heat divided by absolute temperature quantity in development:

1865 coining
On April 24th, 1865, during a reading to the Philosophical Society of Zurich, Clausius gave the following statement, in what was his first mention of the term “entropy”, shown below, left in the original German and right in the first 1867 English translation by mathematical physicist Thomas Hirst: [1]

“The term entropy, it will be observed, is here used in accordance with the original suggestion of Clausius, and not in the sense in which it has been employed by Professor Tait and others [Maxwell] after his suggestion. The same quantity has been called by Professor Rankine the thermo-dynamic function.”

Next, in his second 1873 thermodynamics article, Gibbs stated: [9]

Maxwell
Scottish physicist James Maxwell had a number of stumbling blocks in respect to his understanding of entropy, owing to his first rendering discerned from his reading of Peter Tait's 1868 Sketch of Thermodynamics, wherein the sign for entropy was "incorrectly" reversed, as follows (as explained (Ѻ) by Gibbs in 1873):

In a 1 Dec 1873 letter to Tait, after reading Gibbs clarifications, Maxwell stated the following: (Ѻ)

In 1877, Clausius, in a letter to Maxwell (Nov 8), explained the origin of the term ‘entropie’ (Ѻ), the letter, in the original German, from Maxwell’s collected scientific letters (Ѻ), is shown below: 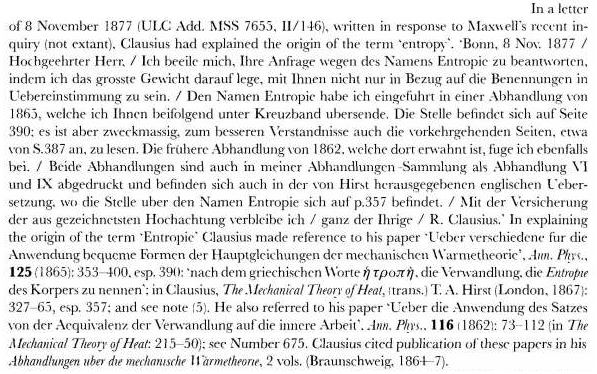 Clausius | 1875 restatement
In the updated 1875 second edition to his Mechanical Theory of Heat textbook, Clausius reaffirmed his etymology as follows: [2]

“In another paper, after introducing a further development of the equivalence of transformations, the author proposed to call this quantity, after the Greek word τροπή, transformation, the entropy of the body [S].”

False etymologies
In the 1955 work Thermodynamics of Irreversible Processes, Belgian chemist Ilya Prigogine gave the following incorrect etymology: “The second principle of thermodynamics postulates the existence of a function of state, called entropy, from the Greek ενρωπη meaning “evolution”. [4] In any event, whatever his agenda was at this point, Prigogine and his co-author Dilip Kondepudi give the correct etymology in their 1998 textbook Modern Thermodynamics. [5] In the 1998 thermodynamics dictionary A to Z of Thermodynamics, French thermodynamicist Pierre Perrot gives the following incorrect etymology and incorrect date of coining: “[Entropy] a term proposed by Clausius in 1868, from the Greek root eντροπη, the act of turning round (τροπη, change of direction), implying the idea of reversibility.” [6] The Online Etymology Dictionary, since at least 2008, has been correctly claiming that entropy was conceived in the mind of Clausius it on the Greek term entropia, or "a turning toward," from en- "in" + trope "a turning"; whereas the correct sense Clausius uses the Greek term τροπή in the sense of 'transformation' or 'transformation content.' [7]