In geniuses, epicenter genius (IQavg:210) is a thinker whose intellectual output is so bright that he or she attracts a circle of surrounding geniuses, and the effect of the aggregation acts to increase the brightness, and in this sense, in analogy to the description of earthquakes, becomes an "epicenter" or the part of the earth’s surface directly above the focus of an earthquake.

“At the 1927 Solvay conference—which was to become a landmark in physics—Einstein was the uncrowned king of physics. At the epicentre, of the debates about quantum theory, were Bohr and Einstein’s disagreements about Heisenberg’s uncertainty principle, which Bohr defended successfully against Einstein’s repeated onslaughts.”

The following "genius epochs" statement by American reserve energy theory psychologist William James, from his 1880 lecture "Great Men and their Environment", given to the Harvard Natural History Society, might well capture the idea of the epicenter genius: [1]

“Sporadic great men come everywhere. But for a community to get vibrating through and through with intensely active life, many geniuses coming together and in rapid succession are required. This is why great epochs are so rare, - why the sudden bloom of a Greece [Aristotle], an early Rome [Cicero], a Renaissance [Goethe], is such a mystery. Blow must follow blow so fast that no cooling can occur in the intervals. Then the mass of the nation glows incandescent, and may continue to glow by pure inertia long after the originators of its internal movement have passed away. We often hear surprise expressed that in these high tides of human affairs not only the people should be filled with stronger life, but that individual geniuses should seem so exceptionally abundant. This mystery is just about as deep as the time-honored conundrum as to why great rivers flow by great towns. It is true that great public fermentations awaken and adopt many geniuses who in more torpid times would have had no chance to work. But over and above this there must be an exceptional concourse of genius about a time, to make the fermentation begin at all. The unlikeliness of the concourse is far greater than the unlikeliness of any particular genius; hence the rarity of these periods and the exceptional aspect which they always wear.”

An epoch genius, or epicenter genius, is a hammered genius, one that depends on concourse, forged into hardened shape by concourse other geniuses.

Historically, as represented in classical artistic depiction, as shown below, there have been three dominate epicenter geniuses: Aristotle (IQ=195), Goethe (IQ=230), and Einstein (IQ=220). With the inclusion of Voltaire (IQ=195), shown below, Café Procope (circa 1750), at a genius center, this yields and IQavg of 210 for an epicenter genius.

Aristotle's circle
The following is a depiction of epicenter genius Greek physicist-philosopher Aristotle (#15) and his circle in circa 350BC: 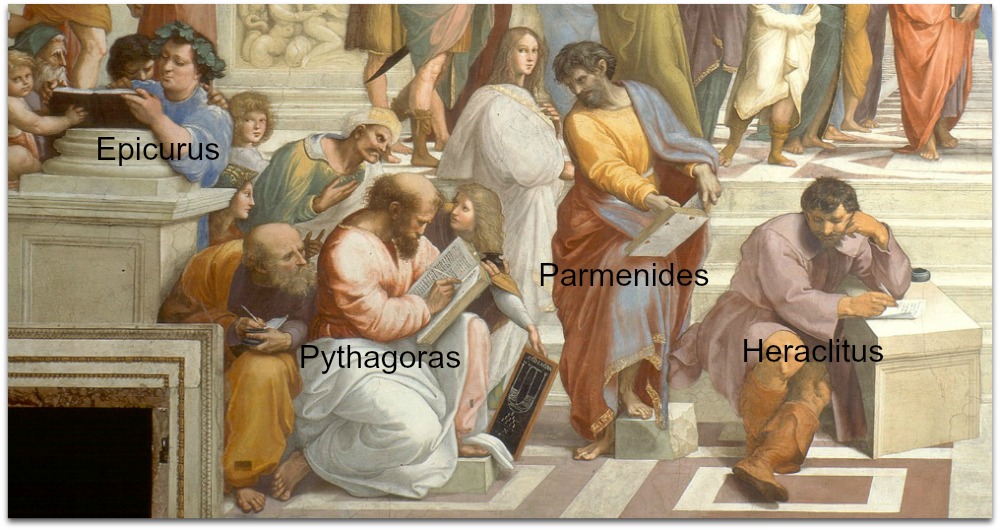 Galileo's circle
Italian physicist Galileo Galilei (IQ=200) might well be classified as an epicenter genius, who had in his immediate communication circle and number of thinkers, such as: Francesco Sagredo, Giovanni Baliani, Evangelista Torricelli, and an aftermath of a number of people affected by his experiments and influence, Blaise Pascal along with Pierre Petit, to name two.

Voltaire’s circle
As to whether or not French philosopher, scientist, and writer Voltaire (1694-1778)(IQ=195) can be classified as an “epicenter genius”, he was ranked by Catherine Cox with an IQ of 200 and he did have a rather large and impressive circle, as what some have classified as “Voltaire’s circle”, such as depicted adjacent, at the famous Café Procope (circa 1750): at rear, from left to right: Marquis Condorcet (IQ=180), Jean-Francois de La Harpe, Voltaire (IQ=195), with his arm raised, and Denis Diderot (IQ=165)—one of the locations of the “age of enlightenment” beginnings, at which Voltaire is said to have drank forty cups of coffee a day, mixing it with chocolate. [5]

Voltaire's circle had connections and homes in France, from which he was banished from in 1726 (and again in 1834), England, where he occupied himself mainly with mathematics and made himself familiar with the philosophy of Newton, and Leiden University, Netherlands, the home to the original heat experiments school of thermodynamics, where he studied the experimental works of Boerhaave and Gravesande.

Other encyclopedists met at Café Procope, including: did Benjamin Franklin, John Paul Jones, and Thomas Jefferson. [5]

French mathematician Marquis de Condorcet (IQ=180) is described as “one of the philosophers of Voltaire’s circle.” [2]

In 1734, following his second banishment from France, at the invitation of a highly-intelligent woman friend, Emilie Chatelet (IQ=190), the so-called “smartest woman ever”, Voltaire moved into her "Chateau de Cirey" near Luneville in eastern France. They studied the natural sciences together for several years. She became the mistress of Voltaire, who commented on her in retrospect: “in 1733, I met a young lady who happen to think nearly as I did.”

Voltaire began a correspondence with Frederick the Great in August 1736. Frederick greatly admired Voltaire and invited him to come to Prussia many times; the invitation did not include Emilie. Frederick and Emilie did not like each other—both were competing for Voltaire. After Emilie's end, Frederick offered Voltaire the position of Chamberlain and 20,000 francs a year if he would come to Prussia. Voltaire accepted and spent three years at Frederick's court from 1750 to 1753. The materialist philosopher Baron d’Holbach was defined as being “one member of Voltaire’s circle”. [3]

In 1777, a year before his end, he visited French philosopher Jean Sales (IQ=190), the initiator of the human molecular hypothesis, and gave 500 pounds to towards his release.

Franklin | Madison
The following shows the depiction of the famous 1789 signing of the Constitution of the United States, centered around Benjamin Franklin and James Madison, the father of the constitution, said to have used his Princeton social physics training and ideas to formulate a Newtonian government:

The following is a depiction of epicenter genius German polymath Johann Goethe (read dinner jacket, standing center) and his circle in 1803:

Clausius circle | Boltzmann circle
Shown below is the connectivity diagram of the twelve founding schools of thermodynamics, showing that Rudolf Clausius, having the most nodal connections (nine), might be an epicenter genius: 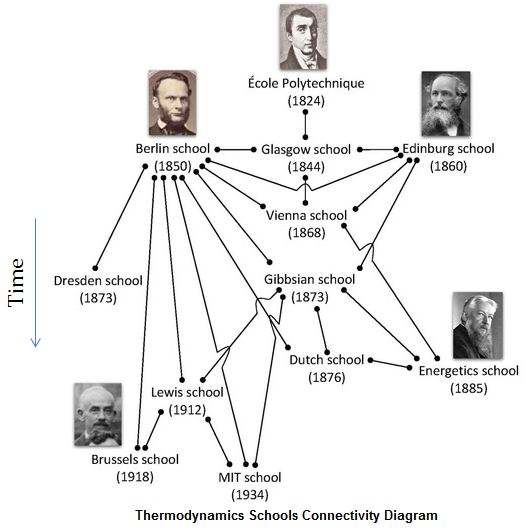 Einstein's circle
The start of German-born American physicist Albert Einstein's rise to "epicenter genius" seems to have found its seed in his 1902 two-person, turned three-person "Olympia Academy". Specifically, sometime in 1902, Einstein, having recently graduated (1900) from the Ecole Polytechnique of Zurich, with a degree in mathematical physics, and working for a minimal wage at the Berne Patent Office, put an advertisement in the paper offering to teach physics as a private tutor at so much an hour.

Shortly thereafter, Rumanian college student Maurice Solovine (1875-1958), shown seated center, adjacent photo, who was studying a mixture of subjects at Berne University, including literature, philosophy, Greek, mathematics, and geology, became Einstein’s first tutor pupil. The two men struck up a close relationship and Einstein was to say to Solovine a few days after meeting him:

"It is not necessary to give you lessons in physics, the discussion about the problems which we face in physics today is much more interesting; simply come to me when you wish, I am pleased to be able to talk to you."

On the third visit, Solovine suggested that they should read some of the standard works and discuss the problems they presented. Einstein then proposed they start with Karl Pearson’s 1900 The Grammar of Science.

This was followed by John Stuart Mill’s (IQ=185) A System of Logic, David Hume’s (IQ=180) Treatise on Human Nature, Benedict Spinoza’s (IQ=175) Ethics, Ernst Mach’s (IQ=?) Analysis of Sensations, Henri Poincare’s (IQ=195) Science and Hypothesis, the work of Bernhard Riemann (IQ=?), whose non-Euclidean geometry was utilized in Einstein’s development of his 1916 general theory of relativity, along with literary works, such as Miguel de Cervantes’s (IQ=155) Don Quixote. At some point along the line, Conrad Habicht (1876-1958), Einstein’s old friend from Zurich, who had recently arrived in Berne to continue his mathematical studies, joined the study group. [7] The three formed a weekly discussion group that eventually came to be known as the Olympia Academy. [7]


Thims circle
In 2012, Belgian philosopher David Bossens, suggestively joked, in a thread post, after reading the above page, whether jokingly or not, that American electrochemical engineer Libb Thims be ranked as an "epicenter genius" (see: Libb Thims (genius ranking)), with him in the center, surrounded by other hmolpedias; the following photo, from the 2013 University of Pitesti Econophysics and Sociophysics Workshop, might give a glimpse into the future:

“People behave as if Einstein is the sun around which all wisdom revolves around like planets.”