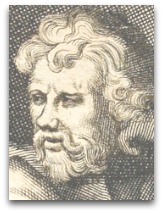 Stoicism
Epictetus is often read in parallel with Marcus Aurelius’ Meditations, to get the best synopsis of stoicism. [1]

Epicetetus, a noted intellectual influence to Origen and Godfrey Higgins, who was a secretary to Nero, from circa 54 to 68AD, is someone who should have known the famed "Jesus", if he had existed, but did not. The main resurrected god of Nero, such as famously depicted at the Dendera Temple (c.68AD), however, was Osiris (not Jesus), on the walls of which Nero is seen placating Osiris and Isis, in the presence of child god Ihy, son of Hathor and Horus. [2] Epictetus doesn’t write about any Jesus Christ or any Jesus of Nazareth; latter commentators, e.g. Elizabeth Carter in her “The Moral Discourses of Epictetus” (1910) (Ѻ) , argue that much of what we now call the moral philosophy of Jesus was stylize on that of Epictetus; Thomas Jefferson, who thinks Jesus thinks was real, also puts the teaching of Epictetus in the same category of Jesus.

Quotes | On
The following are quotes on Epictetus:

“As you say of yourself, I too am an Epicurian. I consider the genuine (not the imputed) doctrines of Epicurus as containing everything rational in moral philosophy which Greece and Rome have left us. Epictetus indeed, has given us what was good of the stoics; all beyond, of their dogmas, being hypocrisy and grimace. Their great crime was in their calumnies of Epicurus and misrepresentations of his doctrines; in which we lament to see the candid character of Cicero engaging as an accomplice. Diffuse, vapid, rhetorical, but enchanting. His prototype Plato, eloquent as himself, dealing out mysticisms incomprehensible to the human mind, has been deified by certain sects usurping the name of Christians; because, in his foggy conceptions, they found a basis of impenetrable darkness whereon to rear fabrications as delirious, of their own invention. These they fathered blasphemously on him whom they claimed as their founder, but who would disclaim them with the indignation which their caricatures of his religion so justly excite.

Epictetus and Epicurus give laws for governing ourselves, Jesus a supplement of the duties and charities we owe to others. The establishment of the innocent and genuine character of this benevolent moralist, and the rescuing it from the imputation of imposture, which has resulted from artificial systems [N1], invented by ultra-Christian sects, unauthorized by a single word ever uttered by him, is a most desirable object, and one to which Priestley has successfully devoted his labors and learning. It would in time, it is to be hoped, effect a quiet euthanasia of the heresies of bigotry and fanaticism which have so long triumphed over human reason, and so generally and deeply afflicted mankind; but this work is to be begun by winnowing the grain from the chaff of the historians of his life.

I have sometimes thought of translating Epictetus (for he has never been tolerable translated into English) by adding the genuine doctrines of Epicurus from the Syntagma of Gassendi, and an abstract from the Evangelists of whatever has the stamp of the eloquence and fine imagination of Jesus. The last I attempted too hastily some twelve or fifteen years ago. It was the work of two or three nights only, at Washington, after getting through the evening task of reading the letters and papers of the day. But with one foot in the grave, these are now idle projects for me. My business is to beguile the wearisomeness of declining life, as I endeavor to do, by the delights of classical reading and of mathematical truths, and by the consolations of a sound philosophy, equally indifferent to hope and fear.”

Quotes | By
The following are quotes by Epictetus:

“But where are you going? It cannot be to a place of suffering: you will only return to the place from whence you came; you are about to be again peaceably associated with the elements from whence you are derived. That which in your composition is of the nature of fire, will return to the element of fire; that which is of the nature of earth, will rejoin itself to the earth; that which is air, will reunite itself with air; that which is water, will resolve itself into water; there is no Hell, no Acheron, no Cocytus, no Phlegethon.”

“The hour of death approaches; but do not aggravate your evil, nor render things worse than they are: represent them to yourself under their true point of view. The time is come when the materials of which you are composed, go, to resolve themselves into the elements from whence they were originally borrowed. What is there that is terrible or grievous in that? Is there any thing in the world, that perishes totally?”

“It's not what happens to you, but how you react to it that matters.”

“As a mark is not set up for the purpose of missing, so neither does the nature of evil exist in the universe.”

“Epicurus was a foul-mouth bastard.”

— Epictetus (c.120AD), Publication; cited by Diogenes Laertius (c.230AD) in Lives and Opinions of Eminent Philosophers (§10.6); as translated (1963) by George Strodach [7]; note: seems to be a more aggressive translation as, say, compare to Robert Hicks (1925) translation