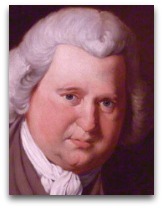 In existographies, Erasmus Darwin (1731-1802) (IQ:175|#235) (EvT:9|21+) (CR:41) was an English physician, poet, philosopher, botanist and naturalist, stylized "singular genius" (Thurston, 1878), patriarch of the great "Darwin family", grandfather of naturalist Charles Darwin and great-great grandfather of physicist C.G. Darwin, noted for his 1791 evolution theories, preceding those of Saint-Hilaire (1833) and following those of Goethe (1784), and for his 1794 Zoonomia: the Laws of Organic Life, in which he argued that organic matter may be the matrix of new life. [1]

Overview
His 1789, Erasmus, in his poem The Love of Plants, offered a long footnote glimpse of his theory of evolution; his 1794/96 Zoonomia contains a chapter on “Generation”, which outline a foreshadow of modern evolution theory.

Origin of life
In 1794, Erasmus, in his Zoonomia: the Laws of Organic Life, on the subject of the origin of life, gave the following opinion:

“Would it be too bold to imagine, that in the great length of time, since the earth began to exist, perhaps millions of ages before the commencement of the history of mankind, would it be too bold to imagine, that all warm-blooded animals have arisen from one living filament, which the great first cause endued with animality, with the power of acquiring new parts, attended with new propensities, directed by irritations, sensations, volitions, and associations; and thus possessing the faculty of continuing to improve by its own inherent activity, and of delivering down those improvements by generation to its posterity, world without end!”

This, no doubt, was a precursor idea to Charles Darwin's later "warm pond model" (1871).

Quotes | By
The following are quotes by Erasmus:

— Erasmus Darwin (1788), “Frigorific Experiments on the Mechanical Expansion of Air” [1]

A fool, Mr, Edgeworth, is one who has never made an experiment.