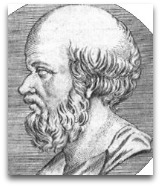 Overview
In c.220BC, Eratosthenes did work on the antipode earth model, a heated topic that, to note, Virgil of Salzburg was later condemned to be burned for having taught this.

Eratosthenes also is the inventor of the science of geography, from Egyptian Geb- “earth god” + Greek -graphia “description of” or “to scrape, scratch” (on clay tablets with a stylus) (Ѻ), including the terminology used today, and popularly known for his measurement of the circumference of the earth, which was accurate to about 1-16% of modern value (40,000 km).

Quotes | On
The following are quotes on Eratosthenes:

“The first to concern themselves with geography were people of that sort, namely philosophers, specifically: Homer, Anaximander, and Hecataeus of Miletus (c.550-476BC), as we learn from Eratosthenes; also Democritus.”

References
1. Taylor, C.C.W. (1999). The Atomists: Leucippus and Democritus: Fragments: a Text and Translation with a Commentary by C.C.W. Taylor (pg. 100). University of Toronto Press.