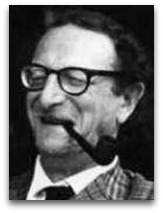 In psychological thermodynamics, Eric Berne (1910-1970) was Canadian-born American psychiatrist noted for his best-selling 1964 book Games People Play: the Psychology of Human Relationships, in which, building on the psychodynamic work of Sigmund Freud, particularly his theory of ego states, he outlined a theory of social psychodynamics in which each players motives depends on aspects of the mental states of the other players in the game. [1] The following is noted passage:

“The eternal problem of the human being is how to structure his waking hours. In this existential sense, the function of all social living is to lend mutual assistance for this project.”

On this view, Berne focuses on the notion that stimulus-hunger through social interaction is parallel to that of the hunger for food and that in the modern world, with an over-abundance of food available to the average person, the former hunger takes precedence in one’s waking hours.

Schiller | Love and hunger
Here, in Berne's keen discernment that in a world of abundant food, we are reminded of Friedrich Schiller's 1795 "The World Ways" poem about how love and hunger rule the world—a few oft-quoted versions of which shown below—according to which, in a food-sated world, love is the sole thing that rules and hence we come to seek solution to Berne's eternal problem of how to solve the nature of his so-called "ego games" in terms of the driving forces of love and hate:

“Love and hunger rule the world.”

“The quantity '–ΔG' [is] the driving force of a [human chemical] reaction.”

— Gilbert Lewis (1923), Thermodynamics and the Free Energy of Chemical Substances

or equivalently the quantity '–ΔG', as Lewis describes things, which naturally leads into a modern human chemical thermodynamics based "ego states" reconceptualization.