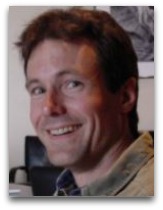 In hmolscience, D. Eric Smith (c.1965-) is an American physicist noted, in economic thermodynamics, for a number of publications and lectures on the thermodynamics of life and economics, such as his 2005 article “Classical Thermodynamics and Economic General Equilibrium”, co-written with economist Duncan Foley, in which they explore concepts such as “economic Helmholtz potential”, the economic version of Helmholtz free energy, entropy, the entropies of economic agents, and seem to build significantly on the Lausanne school of logic, particularly Leon Walras and Vilfredo Pareto. [1]

Overview
In 2002, Smith, together with Duncan Foley, in their “Is Utility Theory so Different from Thermodynamics?”, were trying to extrapolate and or reformulate Leon Walras' notions of economic potentials into a mixture of Gibbs potentials and Helmholtz potentials, arguing that price/quantity was a conjugate variable pair of economics like pressure/volume is of thermodynamics, among other assertions; the abstract of which is as follows: [5]

“Careful examination of the axioms, and interpretation conventions, of utility theory and thermodynamics reveals that the two domains are more similar mathematically than their divergent approaches to problem solving would suggest. Their differences inhere primarily in the economic assignment of importance to initial endowments, versus the physical choice to emphasize reversible transformations. Using an analysis based on reversible transformations in economics, it is shown that utility theory can be represented as a theory of additive price potentials, and nondecrease of an additive entropy in closed systems. The standard money-metric utility is identified as a Gibbs potential for demands, and a new “contour money-metric utility” is introduced as the conjugate Helmholtz potential for prices. Examples show how the central problem-solving tools of thermodynamics apply in detail to conventional utility models, with emphasis on the concepts of reversible transformation, the equation of state, and engines.”

Smith and Foley define economic Helmholtz potential as being an “implementation of a Walrasian potential”, a type of economic free energy, but one that does not correspond exactly to an actual physical energy. They defined economic Helmholtz potential as “an intrinsic money-metric welfare measure of the allocation of an economy in contact with a reservoir, equal to its potential to deliver money wealth to an external market through voluntary trade.” A significant error in this derivation is that they are using the wrong potential. The Helmholtz free energy is the isothermal isochoric potential, and does not apply to economies, being that economic systems are not “isochoric”, i.e. at a constant volume, as is evidenced classically by the rise and fall of empires, a process which correlates with the large volumetric expansions (rise), and later contractions (fall), of economic systems. The correct economic free energy is the Gibbs potential.

American physicist economics theorist Jason Smith (2014) commented that "there is nothing incorrect about about Smith and Foley's reformulation of economics as thermodynamics", which is incorrect. [4]

In 2008, Smith, in his “Chemical Carnot Cycles, Landauer’s Principle, and the Thermodynamics of Natural Selection”, building on the work of Sadi Carnot, Leon Brillouin, Erwin Schrodinger, Rolf Landauer (Landauer's principle), Claude Shannon, among others, argues that “life should be understood as a chemical system in which the flow of energy and storage of energy are related to the flow of and storage of information. [3]

Education
Smith completed his BS in physics and mathematics in 1987 at the California Institute of Technology, and his PhD in 1993, with a dissertation on problems in string theory and high-temperature superconductivity, at the University of Texas, Austin. Since 2000, Smith has been a professor at the Santa Fe Institute, working on problems of self-organization in thermal, chemical, biological, and social systems.