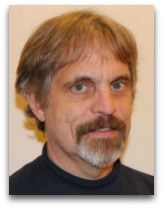 In hmolscience, Eric Steinhart (c.1961-) is an American philosopher noted for his 1999 to present work on Friedrich Nietzsche, Henry Adams, and Pierre Teilhard.

“And do you know what ‘the world’ is to me? Shall I show it to you in my mirror? This world: a monster of energy, without beginning, without end; a firm, iron magnitude of force that does not grow bigger or smaller, that does not expend itself but only transforms itself; as a whole, of unalterable size, a household without expenses or losses, but likewise without increase or income; enclosed by "nothingness" as by a boundary; not something blurry or wasted, not something endlessly extended, but set in a definite space as a definite force, and not a sphere that might be "empty" here or there, but rather as force throughout, as a play of forces and waves of forces, at the same time one and many, increasing here and at the same time decreasing there; a sea of forces flowing and rushing together, eternally changing, eternally flooding back, with tremendous years of recurrence, with an ebb and a flood of its forms; out of the simplest forms striving toward the most complex, out of the stillest, most rigid, coldest forms toward the hottest, most turbulent, most self-contradictory, and then again returning home to the simple out, of this abundance, out of the play of contradictions back to the joy of, concord, still affirming itself in this uniformity of its courses and, its years, blessing itself as that which must return eternally, as a, becoming that knows no satiety, no disgust, no weariness: this, my, Dionysian world of the eternally self -creating, the eternally self-destroying, this mystery world of the twofold voluptuous delight, my "beyond good and evil," without goal, unless the joy of the circle is itself a goal; without will, unless a ring feels good will toward itself—do you want a name for this world? A solution for all its riddles? A light for you, too, you best-concealed, strongest, most intrepid, most midnightly men?—This world is the will to power—and nothing besides! And you yourselves are also this will to power—and nothing besides!”

“The victorious concept of ‘force’, by means of which our physicists have created god and the world, still needs to be completed: an inner will must be ascribed to it, which I designate as ‘will to power’, i.e. as an insatiable desire to manifest power; or as the employment and exercise of power, as a creative drive, etc. Physicists cannot eradicate ‘action at a distance’ from their principles; nor can they eradicate a repellent force (or an attracting one). There is nothing for it: one is obliged to understand all motion, all ‘appearances’, all ‘laws’, only as symptoms of an inner event and to employ man as an analogy to this end. In the case of an animal, it is possible to trace all its drives to the will to power; likewise all the functions of organic life to this one source.”

A deeper analysis of all the Nietzsche fragments, however, will be needed before we can corroborate or refute Steinhart’s analysis assertions.

Adams | Teilhard
Steinhart, also, to note, in his work, touches on the work on Henry Adams and his phase rule theory of history, Friedrich Nietzsche and his will to power theory, and Pierre Teilhard and his omega point theory, all generally focused on the borderland crossings of religion, science, and atheism. [1]

Education
Steinhart completed his BS in computer science in 1983 at Penn State, his MA in philosophy in 1988 at Boston College, his PhD in 1996 with a dissertation on “Formal Semantics for Metaphors: an Essay in the Computational Philosophy of Language” at the University of Stony Brook, and presently is a philosophy professor at William Paterson University, New Jersey.