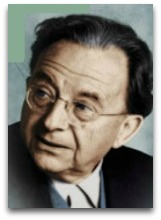 Overview
In 1956, Fromm published his The Art of Loving, wherein he theorizes about people, via human physics and human chemistry metaphors, e.g. individuals as human atoms; discusses concepts such as how human energy and skill are without ‘exchange value’ if there is no demand for them; how, at times, the social machine can operate without friction; models love on chemical-style metaphors including fusion, explosion, orgiastic union, among others.

Human atoms
Fromm models of people as “atoms” as follows:

“Contemporary society preaches the ideal of unindividualized equality because it needs human atoms, each one the same, to make them function in mass aggregation, smoothly, without friction; all obeying the same commands, yet everybody being convinced they he is following his own desires.”

Quotes | Employed
The following are quotes employed by Fromm:

“The deepest need of man is the need to overcome his separateness, to leave the prison of his aloneness. The absolute failure to achieve this aim means insanity.”

“I've made the most important discovery of my life. It's only in the mysterious equation of love that any logical reasons can be found.”

“Fortitude is the capacity to say no when the world wants to hear yes.”