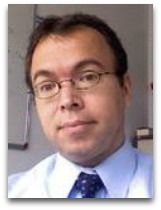 In existographies, Erich A. Müller (1963-) (SNE:9) (CR:48) is a Venezuelan-born English chemical engineering thermodynamicist noted, in human thermodynamics, for his 1998 “Human Societies: a Curious Application of Thermodynamics”, where in he explains society, its bondings and interactions, using chemical thermodynamics arguments.

Overview
In 1998, Muller, in his Chemical Engineering Education article “Human Societies: a Curious Application of Thermodynamics”, defined humans to be analogous to molecules (human molecules), then quantified inter human molecular love and hate in terms of basic thermodynamic pair bonds, and the lastly quantified social forces as a type of van der Waals dispersion force. [1]

In 2005, Libb Thims launched the Journal of Human Thermodynamics, conceptualized thematically on the presentation and philosophical insight of Muller's “Human Societies: a Curious Application of Thermodynamics”.

In 2006, Müller was interviewed by journalist Laura Gallagher, with Reporter magazine, for his popularity for his invigorating thermodynamic lectures in which he draws analogies between molecules and people. In the resulting article titled ‘A Thermodynamic Personality’, Müller states ‘I make lectures a little more light-hearted to get everyone interested. Thermodynamics can be very close to everyday things but some of the textbooks can make it seem abstract. There is no need for it always to look that scary.’ Likewise, according to Gallagher, Müller compares people with molecules to help his students understand interactions between molecules and visualize how they behave. ‘Liquids come together because their molecules attract each other, just like human beings, who like to get close together at parties. However, molecules repel each other when they are too close in the same way that no-one wants to be approached by a close-talker.’ [3]

In 2007, Libb Thims named Müller dispersion force and Müller stability ratio are after Muller and his 1998 article.

Education
Muller completed his BS (1985) and MS (1986) in chemical engineering at the Universidad Simon Bolivar, Venezuela, his PhD in chemical engineering, with a thesis “Molecular Simulation of Homogeneous and Inhomogeneous Associated Fluids”, in 1995 at Cornell University. Müller currently is a reader in thermodynamics at the Imperial College London. [2]