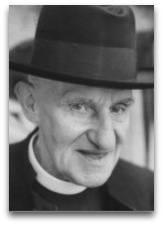 In hmolscience, Ernest Barnes (1874-1953) was an English mathematical scientist turned theologian noted, in religious thermodynamics, for his 1927 to 1929 Gifford Lectures on “Scientific Theory and Religion”, wherein he touches on thermodynamics, quantum mechanics, relativity and god, as he sees things.

Overview
In 1927 to 1929, Barnes gave a series of twenty lectures on “Scientific Theory and Religion: the World Described by Science and Its Spiritual Interpretation”, as part of the Gifford Lectures, in lecture eight of which he covers the first law of thermodynamics and radiation, introduces quantum theory and Röntgen rays, and the consequences for theories of matter, light and energy are suggested and assessed; and concludes by pondering the notions of determinism and spirit in this context. [3] Barnes later touches on the second law. [1]

He also argues that “we are driven to the belief that God lies behind [the] phenomenon” of the cosmological consequences of thermodynamics. [1]

In 1934, Barnes published a revised version of his lectures, entitled Relativity, Thermodynamics, and Cosmology, in which warned cosmologists against making unjustified philosophical preferences. [2]