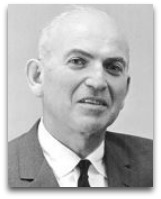 In hmolscience, Ernest Samuels (1903-1996) was an American lawyer and English professor noted for his detailed three-volume biography of American physical science historian Henry Adams, in which are found a number of very ripe unpublished personal communication statements made by by Adams, in his letters and communication notes, such as found in his efforts to find a physico-chemical proofreader (see: Henry Bumstead) and his 1907 to 1909 efforts to formulate a physico-chemical based dynamic theory of history, based on the works of Willard Gibbs, according to which he began to conceptualized himself as a "phase" or equilibrium state. [1]

Adams | Biography
Samuels’ biography of Henry Adams, a precipitate or outgrowth of his 1942 PhD dissertation, was published in three volumes: The Young Henry Adams (1948), Henry Adams: the Middle Years (1958), and Henry Adams: the Major Phase (1964), the last of which won a Pulitzer Prize, all of which were truncated into a one volume abridged edition (1989). Samuels was a great connoisseur of Adams personal correspondences: in 1956, e.g. Samuels traveled to Italy to meet with the art connoisseur Bernard Berenson, who owned letters written by Adams.

Samuels also wrote prefaces and introductions works by Adams, including: Mont-St.-Michel and Chartres (1961), Democracy (1961) and The Education of Henry Adams (1974); he also served on the advisory committee for the publication of the Henry Adams papers and helped edit the collected letters in three volumes. A one-volume abridgement of the letters was published in 1992. [2]

Education
Samuels completed a bachelor’s degree in 1923 followed by a law degree in 1926 at the University of Chicago, after which he practiced law in El Paso, Texas, from 1928 to 1930. He then completed a MA in English in 1931, then practiced law in Chicago from 1933 to 1937, and from 1937 to 1939 was an English instructor at Washington State University. [2] In 1942, Samuels completed a PhD in English with a dissertation on “The Early Career of Henry Adams” at the University of Chicago, after which he began teaching English at Northwestern University, becoming department chair in 1964 and retiring in 1971. [2]

“Man must jump, as Adams liked to say, if he would save himself; a moral and intellectual elite must be recruited. If nothing else would serve to make moral philosophers out of historians, the fear of imminent annihilation might. University education must be revolutionized by the physicist-historian.”