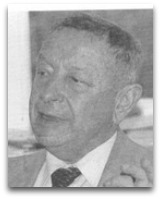 In existographies, Ernest Schoffeniels (1927-1992) was a Belgian biochemist (CHNOPS+ chemist), noted for []

“This book is an answer to Monad’s Chance and Necessity. The origin of life and the evolution of biological systems is explained in the light of a deterministic approach in which ‘chance’ has no place. All physico-chemical processes are determined, and biological systems are no exception to this general rule. This inadequacy of classical thermodynamics to explain biological systems is stressed, and information theory is used to describe these systems in a more satisfactory manner. The book is written at the level suitable for students and research workers in biology, biochemistry, philosophy and human affairs.”

Zoological | Teleology
Schoffeniels, to illustrate the errors of the use of teleological descriptions in zoological behavior, gives the following multiple choice question:

The Egyptian vulture (Neophron percnopterus) (Ѻ) uses a stone to break the eggs upon which it feeds. This observation can be phrase in different ways:

Schoffeniels then asks which of the above statements, from a physico-chemical point of view, is incorrect? To give us a hint in this subtle language correctness matter, Schoffeniels states the following:

“Although very difficult to escape concepts and a vocabulary dedicated by usage, i.e. the ‘epistemological obstacle’ (Ѻ) of Bachelard (1938), the effort is certainly worthwhile. Biology can only enrich itself by abandoning a teleological or ‘finalist’ mode of thought. Elimination of finalist language is no loss for science because that which can be described in teleological terms can also be described effectively in other terms. The universal law of gravitation whose objective description (compare: subjective description) is sufficient in itself. Nothing is further gained by adding that the aim of the apple in quitting the tree is to reach the round or that the aim of HCl is to neutralize NaOH. Moreover, the elimination of ‘finalist language’ avoids the importation into biology of unverifiable theological or metaphysical doctrines not acceptable by the scientific method and the use of explanatory concepts not current in physics or chemistry. ”

Education
Schoffeniels stated (pg. 33) that his "master" was Marcel Florkin, author of Introduction to General Biochemistry (1944).
Quotes | Employed
The following are quotes employed by Schoffeniels:

“The word ‘chance’ expresses only our ignorance of the causes of the phenomena we see happen and succeed each other without any apparent order.”

“We do not know, moreover, that the word ‘chance’ expresses only our ignorance of causes.”

Quotes | By
The following are quotes by Schoffeniels:

“We must relegate the panoply of classic concepts as accessories and re-think biological facts from the viewpoint of thermodynamics.”

“We must, most urgently, cease feeding ourselves on an obsolete vocabulary by casting aside the concepts of function, finality, teleonomy, gratuity, organ, finalized mechanism, and, most importantly, ‘chance’ – because we know today that chance does NOT occur in biology.”

“Our mind is poorly prepared for a scientific approach to human behavior.”

“One should only speak of things which one can measure.”

“The problem of ‘choice’ can only be approached in a reasonable and effective manner by the introduction of the most fundamental biological facts about human behaviour which, we must recognize, represent constants which are difficult to modify by religious, moral or social constraints. Many behavioral and personality problems find their origin in a strict observance of taboos founded on fancies. At the group level they find their expressions in violence, in racial conflict, in emotional dissatisfaction of young generations and in women's liberation movements.”

“The attentive perusal of the little red book Biochemical Evolution (1949) (Ѻ) of Marcel Florkin (Ѻ), has persuaded me that, to be valid, all attempts at solution to the problem of the evolution of man must be looked for at the molecular level.”

“It is my profound conviction that all progress realized in our comprehension of biological phenomena can only improve relations between humans. I entirely share the hope very briefly formulated by Monod and before him by Boris Rybak (Ѻ) that the future of our societies exists only within an ethic whose roots are firmly embedded in scientific knowledge.”

“Fundamental ‘chance’ in the microscopic world of physics is abolished at the level of the living world. Invoking chance, as Monod does, to explain the transformation of species by the interplay of [spontaneous] mutation, which obey the laws of physics and chemistry, and natural selection is certainly a classic viewpoint but one which is far from satisfactory for numerous biologists.”

“The determinism of human behavior, the absence of ‘choice’ and ‘freedom’ are NOT synonymous with the outdated ‘fatalism’ according to which nothing should be done since all is written and all that is to be will be. This is a simplistic view which neglects the profound meaning of physio-chemical determinism and the most elementary rules of structuration of biological systems.”

“An increasingly organized structure results which, if it is determined, represents nevertheless a progressive modification of the ‘initial state’. My deep conviction is that we act in relation to and are determined by the informational flow which traverses and structures us. We finalize, in retrospect, the content of our actions by the exercise of consciousness [i.e. a mind (hydrocarbon structure) “with” (con-) “knowledge” (-scire)].”

Education
In 1973, Schoffeniels was a professor of biochemistry at the University of Liege.