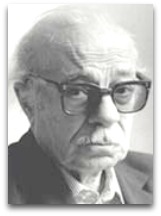 In existographies, Ernesto Sabato (1911-2011) was an Argentine writer, painter, and physicist noted for []

Sabato bible
In 1961, Sabato, in his On Heroes and Tombs, presented a story amid the tumult of Buenos Aires in the 1950s, which “leads its reader into a world of passion, philosophy and paranoia” (Ѻ); the following quote references the so-called Sabato bible:

“On the shelves there was also to be found, naturally, Ostwald’s Energetics, that sort of thermodynamic bible in which god is replaced by a lay entity called energy.”

This can be compared to Goethe Elective Affinities + Rasputin based Grass bible (see: Gunter Grass, 1959):

“After rejecting the public school system Oskar undertakes his own education by close reading of two books whose pages, for simplicity's sake, he has torn out and shuffled to make a single new volume, Goethe's Elective Affinities and a volume promisingly entitled Rasputin and Women.”

As affinity and free energy are equivalent, in the sense of free energy being the measure of affinity, as proved by Hermann Helmholtz (1882), both Sabato and Grass are seen grasping here at the same thing.

“At the Curie Institute [1938], one of the highest goals for a physicist, I found myself empty. Beaten up by disbelief, I kept going because of inertia, which my soul rejected.”