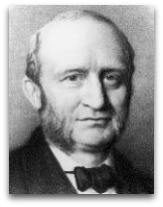 In existographies, Ernst Brucke (1819-1892) (CR:26) was a German physician and physiologist noted for his 1874 publication of Lectures on Physiology, in which it is argued that living organisms are energy systems governed by the conservation of energy (later to be known as the first law of thermodynamics), as defined particularly by German physicist Hermann Helmholtz, Brücke’s former lab partner and friend from medical school. Brücke is said to have founded the Helmholtz school.

Overview
In 1838 to 1842, Brucke worked with Hermann Helmholtz, along with German physician Emil Du Bois-Reymond, the founder of experimental neurophysiology, in the laboratory of the German physiologist Johannes Muller. In opposition to Muller’s adherence to the principle of vitalism, a doctrine that the functions of a living organism are due to a vital principle distinct from physiochemical forces, the three of them, in the words of Du Bois-Reymond, formulated a desire to validate the basic truth that: [1]

“In an organism no other forces have effect than the common physio-chemical ones.”

This is the short version of the Reymond-Brucke oath.

In 1874, Brucke, in his Lectures on Physiology, supposed that all living organisms are energy-systems governed by the first law of thermodynamics, which states, in effect, that the total amount of energy in any given physical system is always constant, that energy quanta can be changed but not annihilated, and consequently that when energy is moved from one part of the system it must reappear in another part. In his Lectures, Brücke set forth the radical view that the living organism is a dynamic system to which the laws of chemistry and physics apply. [2] This publication was the seed for the later formation of the science of psychodynamics or psychological thermodynamics.

Freud
In 1873, a young Sigmund Freud started medical school at the University of Vienna. His first-year adviser was Brücke, who was then director of the director of the Physiology Laboratory at the University. Over the next six years, initially concentrating on biology, Freud did research under Brücke. This was the starting point for Freud's dynamic psychology of the mind and its relation to the unconscious. Freud, who had great admiration and respect for Brücke, quickly adopted Brücke’s new 'dynamic physiology' with enthusiasm. [2]

From there it was but a short conceptual step - but one which Freud was the first to take, and on which his claim to fame is largely grounded - to the view that there is such a thing as psychic energy, that the human personality is also an energy-system, and that it is the function of psychology to investigate the modifications, transmissions, and conversions of 'psychic energy' within the personality which shape and determine it. This latter conception is the very cornerstone of Freud's psychoanalytic theory. [3] The first mention of the issue of “energy” in relation to conservation, or the first law of thermodynamics, in the mind of Freud seems to be in an April 1875 letter where he is having issues about the question of the existence of God in regard to science. In particular, he states: [4]

“The principle of the conservation of energy, of the interaction of natural forces, which we consider as the best fruits of scientific research, seem to involve the end no less than the beginning of the world.”

Freud, however, was very subtle in referencing or citing the origins of his later ideas. Most, however, agree that his use of energy or force in the explanation of psychological dynamics trace to his experience with Brücke. As British developmental psychologist John Bowlby points out in 1973:

“The psychical energy model that Freud brought to psychoanalysis came, not form his clinical work with patients, but from ideas he had learned many years earlier, especially when he was working in the laboratory of his admired professor of physiology, Brücke. During the 1840s, Brücke had been one of a group of dedicated young scientists, of whom Helmholtz was the leader, who were determined to show that all real causes are symbolized in science by the word ‘force’. Since the achievements of the Helmholtz school soon became famous, it was natural that Freud, working under one of their number, should have adopted their assumptions.”

In addition, to confirm his opinion, Bowlby cites Jones (1953) who points out that the style and content of Brücke’s Lectures correspond closely to the words Freud always used to characterize psychoanalysis in its dynamic aspect, such as “…psycho-analysis derives all mental processes (apart from the reception of external stimuli) form the interplay of forces, which assist or inhibit one another, combine with one another, enter into compromises with one another, etc. [6] All-in-all, Brücke’s 1874 Lectures had a lasting life-long influence on Freud, instilling the radical proposition that the living organism is characterized by dynamism. Freud, in turn, whet on to apply this idea to the levels and structures of the unconscious mind and to examine the role that dynamism plays in human development. [7]