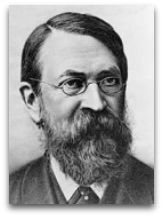 In existographies, Ernst Mach (1838-1916) (IQ:175|#235) [RGM:198|1,350+] was an Austrian physicist and philosopher note for his 1896 book Principles of the Theory of Heat: Historically and Critically Elucidated and for his harsh attack on fellow Austrian Ludwig Boltzmann’s statistical thermodynamics work, sometimes called the “Mach-Boltzmann controversy”, being in direct opposition to Boltzmann’s supposition of the existence of atoms. [1] Mach was one of the founders of the school of energetics.

In 1873, Austrian physicist Ludwig Boltzmann joined the University of Vienna as Professor of Mathematics and there he stayed until 1876. In 1893, Boltzmann succeeded his teacher Joseph Stefan as Professor of Theoretical Physics at the University of Vienna. Boltzmann, however, did not get along with some of his colleagues in Vienna, particularly Mach, strong objector to the molecular hypothesis (used by Boltzmann in his statistical derivation of the second law), who became a professor of philosophy and history of sciences in 1895. Thus in 1900 Boltzmann went to the University of Leipzig, on the invitation of German physical chemist Wilhelm Ostwald. After the retirement of Mach due to bad health, Boltzmann came back to Vienna in 1902.

Turning tendencies
In precursor to the concept of "human molecular spin", in 1885 Mach used the term "turning tendencies" when discussing the circular movements of troops on dark nights, and how one will tend to walk in circles if lost in the woods. [2]

“I don’t believe that atoms exist.”

“The task of the early investigators who lay the foundation is quite a different one from that of their successors. The former have to seek out and establish the weightiest facts only, and to do this, as history teaches, calls for more intelligence that is generally believed.”

— Ernst Mach (1897), The Mechanics in Their Historical-Critical Development [4]