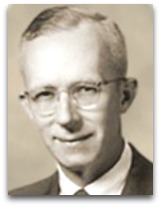 Overview
In 1936, Muller invented the “field emission microscope”, which operates such that a specimen, such as tungsten, is made into the shape of a sharp tip or needle, with a tip radius of 50 nm then put into a vacuum, and subjected to a large negative voltage, of about a few 3,000 volts, which results to make electric field at the tip of about 10 V per nm. At this point, via a quantum mechanical tunneling, the field forces electrons to be emitted from the tip and accelerate towards a nearby phosphorus screen, where the project a magnified image of the sample surface onto the screen. This new field emission microscope, had a lateral resolution of about 20 nm, but did not achieve atomic resolution.

In 1951, Muller, working at the Kaiser Wilhelm Institute, Berlin, improved upon the latter model, with the invention of the “field ion microscope”, wherein, in stead of having the sample emit electrons, he had the sample emit gas atoms, e.g. helium or neon, that became ionized, as H⁺ or He⁺ ions, which formed narrow streams that emanated form the individual lattice atoms, thereby giving a higher resolution of about 2 to 2.5 nm.

Atoms | Viewed
On 11 Oct 1955, Kanwar Bahadur, one of Muller’s graduate students, at Penn State University, was setting up a tungsten tip sample, with Muller’s new “field ion microscope”, then began the experiment and went to summon Muller to observe the results. Muller went into Bahadur’s lab, while two other graduate students Russell D. Young and Allan J. Melmed waited outside the door, anxiously and patently, as the it takes about 20-min for the eyes to adapt to the dark to be able to see the phosphors screen. Then the moment came, and Muller saw an image of “tungsten lattice atoms” on microscopic screen, at which point exclaimed:

-
The following is an image of Muller lowering the temperature of this tungsten sample, via what looks to be liquid nitrogen being poured into the tube of his "field ion microscope", which he used to view tungsten atoms, such as shown imaged on the phosphorus screen, at right, the arrow pointing to one individual atom:

The following is a synopsis of what Muller accomplished, where, below left, each dot is an individual tungsten W (Z:74) atom, which Muller saw with his own eye; middle, is a latter image of platinum Pt (Z:78) atom photographed; and below right is the "historical marker" sign that stands outside of Osmond Laboratory, Penn State University, where this monumental achievement was actuated:

The following is a 28 Apr 1959 photo (Ѻ) of Muller hold his “field ion microscope”, which he invented in 1951, standing in front of the tip-shaped tungsten needle, each individual tungsten atom shown by a dot, which he viewed for the first tome on 11 Oct 1955, which is shown on the cover of 28 Nov 2005 cover of Chemical & Engineering News, in celebration of the 50th anniversary of the “atomic imaging”: [1] 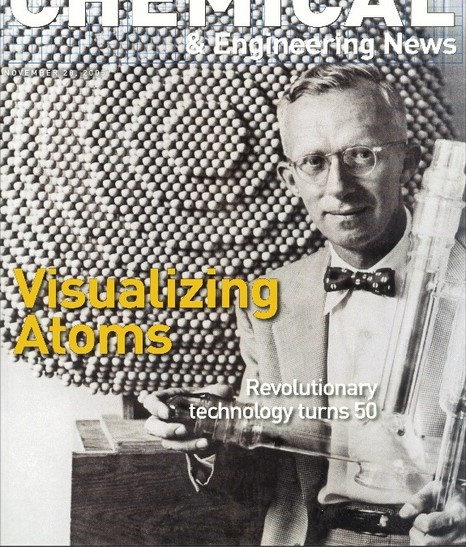