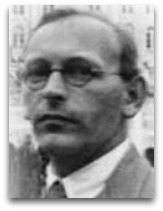 In hmolscience, Erwin Simonovich Bauer (1890-1938), or Ervin Bauer, was a Hungarian-born Russian physician, pathologist, and physical biologist noted, in animate thermodynamics, for for his free energy based so-called "principle of the permanent inequilibrium of living matter", aka Bauer principle, aimed at explaining life in physical terms.

Overview
In 1918, Bauer was "deep in work, constantly thinking about biology", as he told his wife Margit Kaffka in letter. [8]

In 1920, Bauer published his The Fundamental Principles of Biological Science, in which he introduces the so-called so-called "principle of the permanent inequilibrium of living matter", or what has come to be known as the Bauer principle, which states that: [1]

“The living and only the living systems are never in equilibrium, and, on the debit of their free energy, they continuously invest work against the realization of the equilibrium which should occur within the given outer conditions on the basis of the physical and chemical laws.”

A shortened version of the Bauer principle, according to Russian biophysicist Mikhail Volkenstein, is: [2]

In 1935, Bauer published a third version of his treatise entitled Theoretical Biology, in Leningrad, in the form of 5,200 copies, which quickly sold out, which is the most-cited version of his work.

Translations | Rarity
Bauer’s works, currently, are only in Russian or Hungarian, and copies are rare; in particular, in 1938, during the great Soviet purge, Bauer, accused of being a spy, was shot by the KGB, and nearly all copies of his works, deemed an “enemy of the people”, were pulped. In 1967, a Hungarian translation of the 1935 edition was published as Elméleti Biológia. In 1982, a Russian preprint was issued with an extended summary in English. [5]

Influence
Promoters of Bauer’s work include: Russian biochemist Sergey E. Severin (1901-c.1980) (Ѻ) and his student Simon Shnol (1920-) (Ѻ)—mentor to Anatol Zhabotinski, eponym of the famous Belousov-Zhabotinsky reaction (Ѻ)—who were both discussing Bauer and his work when it was forbidden to even mention his name. In the 1960s, Soviet embryologist Tokin Boris (1900-1984) (Ѻ), a friend and superior to Bauer, began to promote his work in Hungary, resulting in a 1967 translation of Bauer’s work, in Hungarian, by the Hungarian Academy of Sciences. In 2003, Hungarian chemical engineer Tibor Ganti, in his so-called chemoton theory of living systems, began to build on and discuss Bauer's work; which thus seems to the only readily available English presentation of Bauer's views, some of which is outlined below.

Animate vs inanimate
Bauer, supposedly, evoked our outlines some type of “life principle” in his work to the effect that living beings follow a deeper organizing principle than inanimate objects, namely that organisms have inner motivations, which dominate over outer conditions, which machines do not have. [6]

Free energy
Hungarian chemical engineer Tibor Ganti, noted for his 1971 theory that living organisms are chemotons, or chemical automatons, gives a fairly good overview section of Bauer’s theories as they concern free energy, with accompanying equations. Bauer’s so-called “principle of constant non-equilibrium” of living systems, according to Ganti, states that: [4]

Thus if the free energy of the living system is in equilibrium equal to F, the sum of the work factors—differences in pressure, concentration, electrical potential, etc., is equal to the changes caused by them in a time interval of t equal to X, the corresponding data for nonliving system are denoted by F’, x’, and Δx’, then:

A full reading of the original work, to note, will be needed to discern what exactly Bauer is getting at in this passage, as there seem to be mathematical typos in the translation given by Ganti, among other factors; although the argument seems to be an extrapolation of the work of Willard Gibbs, in some way or another.

Biography
Bauer was born in Hungary in 1890 and died in 1938. He was married twice, first to writer and poet Margit Kaffka, who died of the Spanish flu on December 1, 1918. Bauer later married Stefania Szilard, sister of physicist Leo Szilard. The Bauers were arrested by the KGB on August 4, 1937 accused and convicted of spying for a foreign country, and were condemned to death. They were shot on January 11, 1938 by Senior Lieutenant A.R. Polikarpov of the Leningrad NKVD and interred in a mass grave. The reason for the incorrect date of death commonly cited as 1942 is that the original documents surrouding Bauer's death were not given to the family until 1992. [5] Boris Tokin, Bauer's friend and superior, gave a short biography of Bauer in the 1982 Hungarian reprint of Theoretical Biology.

Quotes | About
The following are praise, tribute, and or summary quotes:

“Bauer's dream of theoretical biology was similar to Einstein's goal in physics to create a single equation that encompasses the ‘essence of nature’, from which all physical phenomena can be derived.”