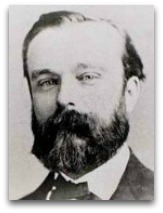 In hmolscience, Etienne-Jules Marey (1830-1904), oft-cited "E.J. Marey", was a French physiologist-anatomist, noted for his 1873 Animal Mechanism, replete with chapters on “Forces in the Inorganic World and among Organized Beings” (§1), “Transformation of Physical Forces” (§2), “On Animal Heat” (§3), wherein he touches on Antoine Lavoisier’s work on animal heat, “On Electricity in Animals” (§6), “Animal Mechanism” (§7), wherein he discusses animal mechanism, e.g. the “dynamical energy of animated motors”, among others, amid which he employs the term “thermo-dynamics” 7+ times (e.g. "animal thermodynamics").

Unbridgeable gap
In 1873, Marey published his Animal Mechanism, of which the following is the bold opening paragraph:

“Living beings have been frequently and in every age compared to machines, but it is only in the present day that the bearing and the justice of this comparison are fully comprehensible. No doubt, the physiologists of old discerned levers, pulleys, cordage, pumps, and valves in the animal organism, as in the machine. The working of all this machinery is called "animal mechanics" in a great number of standard treatises. But these passive organs have need of a motor; it is "life", it was said, which set all these mechanisms going, and it was believed that thus there was authoritatively established an inviolable barrier between inanimate and animate machines.”

Marey, here, is touching on the so-called "unbridgeable gap". He goes on to say that because modern engineers have created machines, which via combustion, and the animation of various mechanical organs, thereby, we are now more legitimately able to compare animals to animate motors, we now need to “seek another basis for such distinctions”.

“The complications in the measure of force among organized beings shows what difficulties await those who are endeavoring to verify the principles of thermodynamics in animals; yet, nevertheless, it would be illogical to admit without proof that, in living beings, the physical forces do not obey natural laws. Several savants [Jules Beclard; Gustave Hirn], firmly convinced of the generality of the laws of thermodynamics, have attempted to demonstrate them upon the animal organism.”