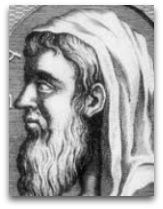 Influence
Euclid’s Elements was influential to noted thinkers and thermodynamicists, including: Nicolaus Copernicus, whose two main personal library books were Euclid's Elements and Regiomontanus' Tables of Directions, Robert Hooke, who mastered Euclid at age 15, James Watt studied Euclid's Elements and Isaac Newton's natural philosophy as a youth; James Thomson (mathematician), father to noted child prodigy William Thomson, who edited a version of Euclid's Elements (1834); Scottish physicist James Maxwell, who mentions Euclid in his last-dying poem “A Paradoxical Ode”, to German-born American Albert Einstein, who at age 12 was given a text on Euclidean geometry, which he called the “holy geometry book”; to Sarah Sidis (tutored by Boris Sidis; mother to William Sidis) who in 1891 (age 17) "propped Euclid up above the sink, and studied while she washed the dishes"; and to Russian engineer Yevgeny Zamyatin, who intersperses his 1923 literature thermodynamics work with mentions of Euclid. [1]

Non-Euclidean geometries
Euclid’s fifth postulate, from the beginning, was regarded with suspicion by his contemporaries. German mathematical physicist Carl Gauss (1777-1855), in an unpublished manuscript shared with friends, starting from statements that contradicted the permanently “inculpated” postulate, underlined the fact that one could develop a compatible geometries. [3] One example of such later came from Bernhard Riemann (1826-1866).

Hobbes
In 1629, English philosopher, social physicist, and political theorist Thomas Hobbes (1588-1679), noted secretary to Francis Bacon, and student, of sorts, of Galileo Galilei (1636), one day, while walking through a library, as the story goes, as told by Philip Ball, happened to glance at a copy of Euclid’s Elements that was laying open, and became transfixed, following each proposition, which at first he saw as being impossible, but soon thereafter became demonstratively convinced of the truth; and into the 1630s, amid the “unstable society” tensions erupting between the Crown and the Commons led by Charles I, namely to dissolve the Parliament and embark on an eleven-year period of personal rule, Hobbes sought to find a theory of governance with credentials as unimpeachable as those of Euclid’s geometry. [5]

Spinoza
Dutch philosopher Benedict Spinoza (1632-1677) famously attempted write or rather derive his Ethics: Demonstrated in Geometrical Order, a treatise on morality written in the style of Euclid's Elements, as a series of geometrical proofs of numerous philosophical points, accompanied by definitions, axioms, demonstrations, and corollaries, as well as intervening stretches of friendlier prose (scholia); following is a representative quote from Ethics part three: [4]

“I shall consider human actions and desires in exactly the same manner, as though I were concerned with lines, planes, and solids.”

Praise | Tributes
The following noted aspects of praise or tribute:

“Euclid’s Elements, in thirteen books, is said to have exercised an influence on the human mind greater than that of any other work except the Bible.”

“There is no royal road to geometry.”

— Euclid (c.290BC), Reply given when the ruler Ptolemy I Soter asked Euclid if there was a shorter road to learning geometry than through his Elements (Ѻ)