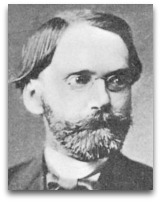 In existographies, Eugen Duhring (1833-1921) was a German philosopher, positivist, economist, and socialist, noted for []

Overview
In 1873, Duhring, in his Course of National and Social Studies, inspired by Henry Carey, saw ‘force’ as the basis of all social activity, equating violent and coercive force with the forces of physics. [1]

Engels
In 1878, Friedrich Engels, in his Anti-Duhring: Mr. Eugen Duhring's Revolution in Science, penned in opposition to the ideas of Duhring, invoked water metaphors when he likened the revolutionary transformation of a society (see: social phase) to the qualitative phase transformation of ice into water and water into steam. [2]

Quotes | On
The following are quotes on Duhring:

“Duhring was almost Lucretian in his anger against religion.”

“Engels, in his Duhring's Revolution in Science, draws a sharp distinction between the sciences concerned with inanimate nature (mathematics, astronomy, mechanics, physics, chemistry) and those concerned with living organisms. The former group of sciences, according to Engels, are susceptible to mathematical treatment ‘to a greater or less degree’. No such precision is possible in the sciences concerned with living organisms. ‘In this field there is such a multitude of reciprocal relations and casualties that not only does the solution of each question give rise to a host of other questions, but each separate problem can usually only be solved piecemeal, through a series of investigations which often requires centuries to complete; and even then the need for a systematic presentation of the interrelations makes it necessary again and again to surround the final and ultimate truths with a luxuriant growth of hypotheses’.”

“Eugen Duhring (1873) took his inspiration from Carey and saw force as the basis of all social activity, equating violent and coercive force with the forces of physics. The central institution of force in any society is its state, which establishes the conditions under which other social institutions must exist. Institutions such as slavery, wage labor, and property, as 'constitutional forms, are the infrastructure or 'frame' within which 'secondary' economic laws operate. Economic activity, then, is embedded in a framework of institutions sustained by the force of the state.”