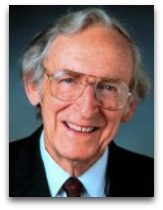 In hmolscience, Eugene Pleasants Odum (1917-2002) was an American zoologist noted, in ecological thermodynamics, for his 1953 Fundamentals of Ecology, wherein he incorporated first law and second law models and ideas.

Overview
In 1953, Odum, in his textbook Fundamentals of Ecology, was the first to incorporate the first two laws of thermodynamics into ecology. [1]

Odum worked on his textbook in partial collaboration with his brother Howard Odum and through their joint writings the Odum’s introduced a number of non-rigorous thermodynamic conjectures, such as emergy, embodied energy, the maximum power principle, energese (energy systems language), among others. [2]