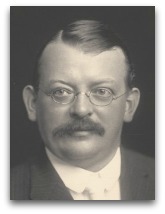 WWI | Social reaction
In Sep 1914, Roeber, in his “The European War”, the opening editorial of Metallurgical and Chemical Engineering, expounded on his views that WWI (28 Jul 1914 – 11 Nov 1918) was a large social chemical reaction, comparing individuals to free ions, without free will, of dissociation theory, among other assertions; the following is the text of this editorial:

“War is hell. Our knowledge of what is happening on the other side of the Atlantic comes to us through a rapid sequence of extra-editions of newspapers and while this highly excitable moving picture show of glaring headlines, more or less contradictory, passes before our eyes, we see only one thing clearly—that a gigantic calamity has come over Europe—and we pause quietly to ask why this whole terrible thing is going on.

Nor is this inference unwarranted. We know that an individual acts differently in a crowd than when left to himself. We know that we may be impressed quite differently by a silver-tongued orator if we hear him in the midst of a sympathetic crowd than when we read his sophisms in the quiet of our home. And when in the past the Devil wanted to try a particularly interesting human reaction, he created a boom in a mining camp. Mark Twain has sketched vividly how the actions of otherwise perfectly sensible and normal men become abnormal in a mining boom. The fact is that when crowd psychology of which national psychology is a variety, gets the best of individual psychology, the "free will" of the individual is gone; there remains not much more of it than the "mean free path" of an atom. Crowds and nations then act under the blind forces of nature. In the gigantic human reaction which the European war represents, the most celebrated individualities do not seem to have much more freedom of will than the "free" ions of the dissociation theory. And this is the most terrible thing in the situation, because if it is so, it means that the thing must go on to its most brutally complete conclusion.

There are clear-cut reversible chemical reactions [see: reversible chemical reaction]. The European war is nothing of the kind. It is irreversible in all its phases and it is a horrid melee of half a dozen or more human reactions so that we cannot say which are primary or secondary—the hatred [negative affinity] of race against race or commercial rivalry and envy or a revenge idea or an excess of militaristic autocracy or what else. We only know with absolute certainty that because it is an irreversible reaction its outcome is determined by the second principle of thermodynamics. Whatever may be the detailed result of the war for this or that country or nation, in the whole there must be a frightful increase of entropy. That is, European civilization as a whole must be reduced from a place in the sun to a temperature much nearer absolute zero.

Education
Roeber completed his undergraduate work at the universities of Jena, Halle, and Berlin, completing his PhD at the latter in 1892. [3]