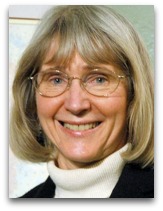 In hmolscience, Eugenie Scott (1945-) is American physical anthropologist turned NCSE director (1987-2014), noted for her efforts to combat teaching of creationism in the American educational system.

In 2005, Scott was one of the organizers (Ѻ), expert witnesses (Ѻ), behind the win at the Kitzmiller vs Dover lawsuit. [3]

In 2006, Scott co-authored the article “Public Acceptance of Evolution”, which shows (Ѻ) ranking second to lowest ahead of Turkey in respect to public acceptance of evolution. [2]

Beliefs
In 2003, Scott described herself as an atheist who “does not discount the importance of spirituality.” (Ѻ)

Debates
In 1974, Scott was drawn into the science vs creationism debates sphere when she attended a debate between physical anthropologist James Gaven, he PhD mentor, and biochemistry creationist Duane Gish, wherein she learned the intricacies of audience reception. [3]

Scott has since debated philosopher physicist creationist Stephen Mayer, among others.