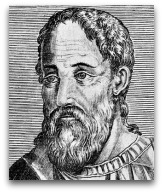 Overview
In 300AD, Eusebius, in his Ecclesiastical History, stated that there was an alleged persecution (Ѻ) of a “Christian” (see: silent historians problem) at Lyon in Gaul (177AD) during the reign of Marcus Aurelius; this purported persecution, however, is debatable (Ѻ), e.g. it is not mentioned in Irenaeus 5-volume Adversus Haereses (180AD), and it is out his Stoic character. [2]

Quotes | By
The following are quotes by Eusebius:

“The first man, according to the Egyptians, was Hephaestus [Ptah], who was the inventor of fire. From him descended the sun. After whom Agathodaemon (Ѻ) . After whom Cronus [Saturn]. Then Osiris. And then Typhon [Set], the brother of Osiris. After whom was Orus [Horus], the son of Osiris and Isis. These were the first Egyptian kings. After them, the empire descended by a long succession to Bites, through a lapse of 13,900 years [months]; reckoned, I say, in lunar years of thirty days to each: for even now, they call the month a year. After the gods, a race of demi-gods reigned 1,255 years. Then reigned other kings 1,817 years. After them, thirty Memphite kings, 1,790 years. Then ten Thynite kings, 330 years. Then came the kingdom of the manes and demi-gods. 5,813. The number of years altogether amounts to 11,000; which also are lunar years, that is to say, months. All the lunar years which the Egyptians allow to the reigns of the gods, the demi-gods, and the Manes, are 24,900.”