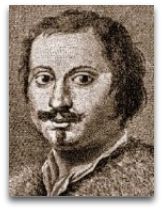 In existographies, Evangelista Torricelli (1608-1647) (IQ:175|#241) [Kanowitz 50:46] (GPE:89) (Eells 100:85) (CR:59), pronounced "Toor-a-chelli" (Ѻ), was an Italian mathematical physicist noted for his 1644 investigation of the pump problem, suggested to him by his mentor Italian physicist Galileo Galilei, wherein he invented the world’s first barometer, therein proved that atmospheric pressure exists, and experimentally demonstrated the vacuum (see: Torricelli vacuum); this later put the idea into the head of Blaise Pascal (1648) to climb a mountain with the barometer, to see if it's height went down as one climbed.

Mercury
In 1638, Galileo, in the Leiden edition of his Discourse on the Two New Sciences, added a note to his Galileo engine (1632) discussion, stating that if, in stead of water, other liquids such as mercury, oil, or wine were used, that the so-called "rupture of the vacuum" would occur at a higher or lower height:

“And it is my belief that the same result will follow in other liquids, such as quicksilver, wine, oil, etc., in which the rupture will take place at a lesser or greater height than 18 braccia, according to greater or less specific gravity of these liquids in relation to that of water, reciprocally; always measuring such heights perpendicularly, however.”

— Galileo (1638), corrections made by Vincenzo Viviani, with the approval of Galileo, to the Leiden edition of Discorsi; cited by William Middleton (1964) in The History of the Barometer (pg. 20)

This text addition, supposedly, was made by Galileo's student Vincenzo Viviani, with the approval of Galileo. Viviani, also, later became the pupil of Torricelli. Thus, no doubt, Torricelli would have had this mercury idea in mind.
In 1639 to 1643, Rafael Magiotti told Torricelli about the Berti vacuum experiment; Magiotti also mentioned that if salt water was used instead of ordinary water, that the column would not stand so high. [3]

In 1642, Evangelista Torricelli succeed Galileo as philosopher and mathematician to the Grand Duke of Tuscany. [3]

On 11 Jun 1644, Torricelli, in a letter to Michelangelo Ricci, stated that "some sort of philosophical experiment was being done" related to the vacuum:

"Some weeks ago, I asked signor Antonio Nardi (Ѻ) for some of my demonstrations on the area of the cycloid, requesting him to direct them to you, or rather to signor Magiotti, after he had seen them. I have already hinted to you that some sort of philosophical experiment was being done concerning the vacuum; not simply to produce a vacuum, but to make an instrument which might show the changes of the air, now heavier and coarser, now lighter and more subtle. Many have said that the vacuum cannot happen; others that it happens, but with repugnance of nature, and with difficulty. I really do not remember that anyone has said that it may occur with no difficulty, and with no resistance from nature?"

We also note that in c.1663, Carlo Dati (1619-1676) (Ѻ), a disciple of Galileo, and either acquaintance or student of Torricelli, reported, in a letter, that it was not Torricelli that performed the experiment, but rather it was Vincenzo Viviani who made the apparatus, procured the mercury, and did the experiment. [4]

"I reasoned thus: if I found a very obvious cause, from which resulted this resistance that is felt in trying to produce a vacuum, it would seem vain to try to attribute that resistance to the vacuum itself, as it would clearly derive from the other cause. On the contrary, making some very easy calculations, I find that the cause I adopted, i.e. the weight of the air, ought by itself to produce a greater resistance than it does when we attempt to make a vacuum. I say this because some philosopher, seeing that he could not escape confessing that the gravity of the air is the cause of the resistance that is felt in producing a vacuum, would not say that he conceded the operation of the weight of the air, but would persist in his assertion that nature also helps by her repugnance to the vacuum.

We live submerged at the bottom of an ocean of elementary air, which is known by incontestable experiments to have weight, and so much weight, that the heaviest part near the surface of the earth weighs about one four-hundredth as much as water. Then writers have observed regarding the twilight that the vaporous air is visible above us for about fifty or fifty-four miles. But I do not think it as much as this, because I should then admit that the vacuum ought to produce a much greater resistance than it does, even if there is this escape for these writers, that this weight, given by Galileo, refers to the lowest air, frequented by man and animals, but above the peaks of high mountains the air begins to be very pure, and of much less weight than the four-hundredth part of the weight of water.

We have made many glass vessels such as those shown at A and B, wide, and with necks two ells long (see: adjacent figure). When these were filled with quicksilver, their mouths stopped with the finger, and then turned upside-down in a vase C which had some quicksilver in it, they were seen to empty themselves, and nothing took the place of the quicksilver in the vase which was being emptied.

Nevertheless, the neck AD always remained full to the height of an ell and a quarter and a finger more. To show hat the vessel was perfectly empty, the basin was filled up to D with water; and on raising the vessel little by little, it was observed that when the mouth of the vessel reached the water, the quicksilver in the neck came down, and the water rushed in with horrible violence and filled the vessel completely up to E.

While the vessel AE was empty, and the quicksilver, though very heavy, was sustained in the neck AC, we discussed this force that held up the quicksilver against its natural tendency to fall down. It was believed until now, that it was something inside the vessel AE, either from the vacuum, or from that extremely rarefied stuff; but I assert that it is external, and that the force domes from outside. On the surface of the liquid in the basin presses a height of fifty miles of air; yet what a marvel it is, if the quicksilver enters the glass CE, to being in which it has neither inclination nor repugnance, and rises there to the point at which it is in balance with the weight of the external air that is pushing it!

Water, then, in a similar vessel but very much longer, will rise to about eighteen ells, that is to say, as much higher than the quicksilver as quicksilver is heaver than water, in order to come into equilibrium with the same cause, which pushes the one and the other.

This reasoning was confirmed by making the experiment at the same time with the vessel A and with the tube B, in which the quicksilver always stopped at the same level AB; an almost certain sign that the force was not within; because the vase AE would have had more force, there being more rarefied and attracting stuff, and this much more vigorous by virtue of it greater rarefaction than that in the very small space B.

With this principle, I then tried to preserve all the kinds of repugnance which are felt to be in the various effects attributed to the vacuum, and up to this moment I have not met one of them that does not go well with it. I know that may objections will occur to you, but I hope also that think about the matter will appease them.

I have not been able to succeed in my chief intention, to find out with the instrument EC when the air is coarser and heaver and when more subtle and light; because the level AB changes from another cause (which I never thought of), that is, it is very sensitive to heat and cold, exactly as if the vase AE were full of air.” .”

The following is an alternative synopsis of how Torricelli (or Vincenzo Viviani) made his barometer:
-

“Torricelli took a glass tube ∼2 cubits (∼110–120 cm) long and filled it with mercury. He then placed a finger over the end and inverted the tube in a basin containing mercury. He saw that the mercury fell until its height above the surface in the trough was a ‘cubit and a quarter and an inch besides’. A cubit and a quarter is probably ∼73 cm, so he reported the height as in the region of 76 cm of mercury.”

Influenced
Torricelli influenced Blaise Pascal, who in 1648 repeated Torricelli's experiment by taking a mercury dish up a mountain.

Quotes | On
The following are quotes on Torricelli:

“To us his incredible genius seems almost miraculous.”

“It may seem strange that the Tuscan philosopher [Galileo], after advancing so far, should have stopped on the verge of a great discovery. He had already weighed the air, and it was only another small step thence to inter the effect of its incumbent mass. But the atmosphere was still believed to reach to the moon, and the pressure of columns of such enormous altitude seemed to mock all calculation, and overwhelm the imagination, Yet, on reconsidering the subject, Galileo began to suspect the solidity of the explanation which he had given; but it was now too late for him, in his advanced age, loaded with bodily infirmities, and dispirited by clerical persecution, to attempt any farther innovation in science. Recommending it earnestly to bis friend and pupil Torricelli to resume the investigation, this illustrious precursor of Newton expired in 1642. Torricelli now conceived the happy idea of exhibiting the action of a pump [?] on a contracted scale, by means of a column of mercury, width is nearly fourteen times heavier that of water. This experiment he first communicated to his friend Viviani, who performed it with success in 1643; and he afterwards repeated and varied it himself.”

Quotes | By
The following are noted quotes by Torricelli:

“I feel very fortunate to have been born in a century which was able to know and to write the praises of a Galileo, and oracle of nature.”

“Many have argued that a vacuum does not exist, others claim it exists only with difficulty in spite of the repugnance of nature; I know of no one who claims it easily exists without any resistance from nature.”