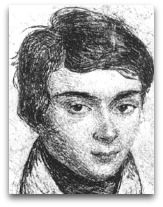 Overview
Galois, prior to age 12, was educated by his mother, Adélaïde-Marie Galois, daughter of a jurist, fluent in Latin and classical literature.

At age 14, Galois read Adrien Legendre’s Elements of Geometry “like a novel”, as he says, mastering it at first reading; at 15, he read Joseph Lagrange’s Reflections on the Algebraic Solutions of Equations, which motivated his later work on equation theory.

Politics
In 1828, Galois, after he entered the Ecole Preparatoire, became friends with the brothers Auguste Chevalier and Michel Chevalier, who were interested in the “Saint-Simonianism” (Ѻ), i.e. the science as religion like utopian views of Henri Saint-Simon, who believed that the best direction for the economics of a society consisted in the elimination of poverty and ignorance, which could be achieved by turning Christianity into a secular religion, and granting power to the scientists rather than the priests. [1]

In 1826, the year after Saint-Simon de-existed (died), meetings of an association to continue the spread of his ideas were held in the Paris apartment of Hippolyte Carnot and Sadi Carnot, which resulted in the newspaper called Le Producteure, which lasted only one year, but had as its most frequent contributors being Auguste Comte.

This movement absorbed Galois, to some extent taking away energy from mathematics, to the extent that in 1830, in his first year final exams, on differential and integral calculus, he scored fourth out of eight candidates, as judged by Augustin Cauchy, and

Quotes | By
The following are quotes by Galois:

“Unfortunately, what is little recognized is that the most worthwhile scientific books are those in which the author clearly indicates what he does not know; for an author most hurts his readers by concealing difficulties.”