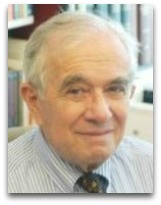 In science, Everett Mendelsohn (c.1932-) is an American science historian noted for his 1964 book Heat and Life: the Development of the Theory of Animal Heat, in which a rather through-going history of the theory of animal heat, from the time of ancient Greek science, into the 18th century theories, e.g. John Hunter, to the modern French-German-English era of modern 19th century science, into 20th century animal thermodynamics.

In Greek science, to give a few examples, Mendelsohn gives overviews of physician Galen’s discussions of the vital flame as well as Hippocrates doctrine of internal heat, which stated that “heat, a quantity which functions to animate, derives from an internal fire located in the left ventricle”.

In French science, Mendelsohn overviews physiologist Claude Bernard’s discussions of how the term ‘life’ is nothing but a word which means ignorance, but a term nevertheless closely associated with heat, as well as chemist Antoine Lavoisier’s combustion theory of heat (animal heat).

Mendelsohn history of the theory of animal heat ends with the mid-to-late 19th century displacement of the animal heat or vital heat theory with the more abstract concepts such as ‘vitalism’, the idea that there is some type of living force inside of animals and people which explains life, as well as the upgrade to the more modern thermodynamic concept of the measure the mechanical equivalent of heat of animals, such as was done by Benjamin Thompson, or the mechanical equivalent of heat of humans, as done by Gustave Hern. [1]

Notes
A noted downside of Mendelsohn’s historical presentation is that he dates the start of the theory of animal heat to the era of the invention of the Greek classical element theory (c.500BC), that everything is made of earth, air, water, or fire; whereas, there seems to exist a large uncharted Egyptian proto-science period (3500-300BC) of pre-history to the theory of animal heat, generally centered around theory that the sun was a god called Ra (or other variants, such as Amun-Ra) that was the “living flame”, that came from the Nun, who created both men and animals. [2] Further research in this area might show an influential connection of the Greek animal heat theory to the Egyptian clay creation myth of men and animals created or rather given life in some way from the living flame. Mendelsohn also seems to precariously leave out mention of the “Promethean heat” myth.

Education
Mendelsohn was a professor of the history of science at Harvard University from 1960 to 2007, thereafter becoming professor emeritus. [3]