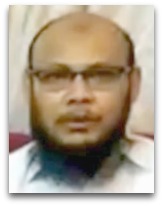 Beg-Thims interview
In 15 to 19 Sep 2019, Faizan helped in the process of the Beg-Thims interview, by being a camera operator, as well as participating in the dialogue of the interview by asking questions, and interjecting at certain points, in regards to clarifications. At the end of the interview, Baig also used his own camera to make a three-person video of himself, with Thims and Mirza Beg, having each person say a few concluding words. [1]

New Dimensions | Conference
Baig stated, in 2019, that he was involved in helping Mirza Beg with publication of a slated second edition of his New Dimensions; also that he would be helping facilitate a video conference presentation by Mirza Beg at the 2020/2021 Two Cultures Conference.

Social potential | Realization
Baig, in his dialogues with Thims, expressed frustration about how, he as a career counselor, working in Pakistan, has observed that there is so much potential in the youth but little realization of that potential. On this question, Thims mentioned of physicochemical sociology and or human chemical thermodynamics, to which Thims mentioned the: social cannon ball model (1868), speech of Henry Pritchett (1906), and the Buss sexual receptivity study (1993), the drive-thru paradox (1995), and also the individualism speech of Ibrhim al-Buleihi, in respect to Faizan's puzzle as to why Pakistan has so much potential in its young people but little will towards realization:

“The individualism of the Arab has been erased in this society.”

This situation is similar to that in China, where communism or socialism has erased "individualism", instead situating the "good of the party" above that of the individual, at all costs. In this respect, the Pakistani realization situation is comparable to the "submission to Islam" in Pakistan dominating over that of individualism.