In famous publications, Faust is a epic drama, written in two-parts (1808,1832) by German polymath Johann Goethe, which retells the story of the legend of Faust, about a man who is striving to learn everything that can be known so to gain control over the physical world.

In the drama, the first use of Faust's power after literally signing a contract with the devil is to fall in love with and impregnate a teenage girl. [2]

Goethe puts into the mouth of Mephistopheles: "all that has achieved existence deserves to be destroyed." [5]

Origin
The origin of the legend of Faust traces to a Dr. John Faust, Johann Faust, or Faustus (b. Knittlignen, Saubia-d. Staufen, 1538).

The etymology of Faust was first put forward in a 1587 literary work by Johann Spies who professes to narrate the “History of Dr. John Faust, the Far-famed Enchanter, and Professor of the Black Art”. [7]

The Faust legend, according to Philip Ball, initially a folk tale about an itinerant charlatan with roots that stretch back to the Bible, the Faust story was later blended with the myth of Prometheus, who paid a harsh price for daring to challenge the gods because of his thirst for knowledge. Goethe’s Faust embodied this fusion, and Mary Shelley popularized it in Frankenstein, which she explicitly subtitled ‘Or The Modern Prometheus’. Roslynn Haynes, a professor of English literature, has explored how the Faust myth shaped a common view of the scientist as an arrogant seeker of dangerous and powerful knowledge. [6]

The Faust story as some comparison to Clive Barker's 1987 Hellraiser film, albeit without the intellectual aspects. 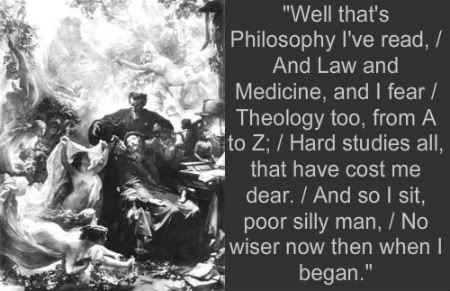 Goethe | Overview
From the age of 4½, in 1753, wherein he learned the story of Faust, through his puppet stage, till the last two months of his reaction existence, in 1832, when he finished the second part to his epic drama version of the Faust legend—the subject of a man striving to learn everything that can be learned—seemed to occupy a large part of his thoughts. As summarized by Jaroslav Pelikan, in his 1997 Faust the Theologian: [1]

“Doctor Faust the polymath is — as was Goethe the polymath — a man of "a hundred scholarly disciplines" [and] also a natural scientist.”

Goethe’s epic closet dramaFaust, was to be completed in stages, and only published in its entirety after his death. The first part was published in 1808 and created a sensation.

The first operatic version, by Spohr, appeared in 1814, and was subsequently the inspiration for operas and oratorios by Schumann, Berlioz, Gounod, Boito, Busoni, and Schnittke as well as symphonic works by Liszt, Wagner, and Mahler.Faustbecame the ur-myth of many figures in the 19th century. Later, a facet of its plot, i.e., of selling one's soul to the devil for power over the physical world, took on increasing literary importance. [2] As far as authors go, according to WorldCat Identities, Shakespeare is #1 and Goethe is #2, based predominately on the following two main works of each author:

As far as minds go, regarding density of knowledge base and vocabulary variety, however, Goethe far excelled Shakespeare, in that, language ability aside, Goethe mastered every field of knowledge; mathematics and astronomy, aside—although he did eventually write a short treatise on mathematics. The references state that Goethe had three-times the vocabulary of Shakespeare.

In his talk with Johann Eckermann, Goethe is supposed to have said that Homunculus is virtually the same as the Leibnizian entelechy or monad, according to John Williams. [3]

These thoughts, Goethe was toying with here, in literary voice, seem to be, in a way, a precursor to the defunct theory of life, the view that when one goes searching for the so-called "origin of life", from the evolutionary point of view, or the exact second of the "start of life", from the conception and creation point of view, that, in the chemical scheme of things, all things being made of atoms, and hence all things being molecular structures, the concept of an atom, chemical, or molecule "coming alive" becomes a very blurry, and eventually untenable, notion. One may thus conclude that Goethe was digging around in very complex issues here.

In an 1892 lecture, titled "Goethe's Presentiments of Coming Scientific Ideas", held in the General Assembly of the Goethe Society in Weimar, German physician and physicist Hermann Helmholtz attempted to explain Goethe's Faust through the lens of thermodynamics. [1] In this speech, Helmholtz postulates that Goethe was aware of the basics of the conservation of energy and argues that the ebb and flow of life, and its relation to death, has an explanation in the total constancy of energy or active force, for both animate and inanimate life.

Serbian-born American electrical engineer Nikola Tesla (IQ=195) memorized Faust in entirety. The idea for a self-starting AC electric motor came to Tesla one evening as he was reciting a poem of Goethe, specifically a passage from Faust, and watching a sunset, at which point he imagined a magnetic field rapidly rotating inside a circle of electo-magnets. [4]

On his deathbed, John Neumann (IQ=190) entertained his brother with word-for-word recitations of the first few lines of each page of Goethe's Faust. [8]

Quotes | Faust
The following are noted quotes from Faust:

“To grant me a vision of nature's forces that bind the world, all its seeds and sources and innermost life... all this I shall see... and stop peddling in words that mean nothing to me.”

“Until one is committed there is always hesitancy, a chance to draw back. Always ineffectiveness concerning all acts of initiative and creation. There is one elementary truth—the ignorance of which kills countless ideas and splendid plans—that the moment one definitely commits oneself, then providence moves too. All sorts of things occur to help one, that would never otherwise have occurred. A whole stream of events issues from the decision, raising in one’s favor all manner of unforeseen incidents and material assistance, which no man could have dreamed would have come this way. Whatever you can do or dream you can do, begin it. Boldness has genius, power and magic in it, begin it now.”

“I regard my work on alchemy as a sign of my inner relationship to Goethe. Goethe’s secret was that he was in the grip of that process of archetypal transformation that has gone on through the centuries. He regarded his Faust as an opus magnum or divinum. He called it his ‘main business’, and his whole life was enacted with the framework of this drama.”

“For myself, the pleasure of the work had always provided justification enough for doing it. Sitting at my desk or at some café table, I manipulate mathematical expressions and feel like Faust playing with his pentagrams before Mephistopheles arrives.”