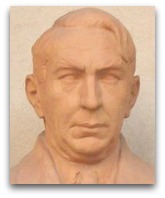 In existographies, Ferenc Mora (1879-1934) was a Hungarian novelist, journalist, and museum and library director, noted for []

Overview
In 1914, Mora wrote an article in a newspaper about the first law of thermodynamics, with focus on Robert Mayer, in which he concluded something to the effect that he will not believe in the conservation of energy into someone can explain to him where his the “energy” of is "childhood" is; the following, translated by Katalin Martinas, is the main quote: