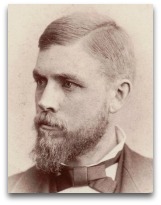 In existographies, Fernando Sanford (1854-1948) (CR:8) was an American physicist, the founding physical science professor of Stanford University, noted for []

Overview
In 1899, Sanford, in his address “The Scientific Method and its Limitations”, gave the following telling statement: [1]

“It is not only in those departments of science where the uniformity of natural law would seem to be a legitimate deduction that the scientific method has found favor with investigators, for at the present time many of the writers on ethics and sociology and theology are attempting to apply the methods and the laws of physical science in their fields of investigation. It is noticeable, however, that it is not the new physics of energy, but the old physics of forces, which is being thus applied. The physics which has been rendered obsolete by the investigation of the century has been taken up by the sociologist, and we have this mighty organism, man, still struggling with as many forces as were formerly supposed to battle for the control of the physical bodies of his individual members. ... If there is any spiritual universe, the phenomena of ethics are spiritual phenomena. The assumption of natural law, that is, physical law, in the spiritual universe means that there is no spiritual universe.

A universe governed by the laws of physics is a universe in which there is no right or wrong, justice or injustice, reward or punishment: nothing but inevitable consequences. . . . This much, at least, is certain: if there is not a uniformity of nature in social phenomena so that effects follow causes with the same certainty as they do in the physical universe, then is there no science of sociology, and no such thing as a moral or social law. In so far as man is a free, moral agent, capable of determining his own conduct, all attempts at predicting what he will do under given circumstances must fail. Only in so far as man is governed, not merely influenced, by laws as unalterable and unvarying as are the laws of the physical universe, can his actions furnish the materials of scientific study. If, on the other hand, there are such laws, then all attempts of man at influencing the social order will be as successful as would attempts at revising the law of gravitation.”

In 1903, Lester Ward, in his social mechanics chapter, of his Pure Sociology, cites this quote in full. [2]

Here we are reminded of Alexander Pope’s famously discussed 1734 “Shall gravity cease when I go by?” quip.

Education
Sanford completed his BS in 1879 at Carthage College, Wisconsin, after which he taught physics for three years at Mt. Morris College, Illinois, then became superintendent of schools for Olge County, Illinois. Then he traveled to Germany to study for two years, studying under German physicist Hermann Helmholtz. He then became professor of physical science, at Lake Forest University, Illinois, where he worked for a few years. Sanford was then approached by American university administrator David Jordan (1851-1931)—who himself had been approached in Mar 1891 by American railroad tycoons Leland Stanford and Jane Stanford to become the founding president of their soon-to-be launched egalitarian Stanford University, scheduled to open in September first professor of physical science, one of the 22 original faculty members, a position he accepted and held until his retirement in 1919. During his career, Sanford wrote many books and papers on the subject of physics, especially on electricity and the mechanism of electrification. [3]

Quotes | By
The following are quotes by Sanford:

“It is plain from the above quotation, that Cabeus did not recognize repulsion as a true property of electrification. Nor was it so recognized by others until the publication by Otto von Guericke of his paper ‘De Virtutibus Mundanis’ in 1672. Von Guericke recognized what he regarded as a true repulsion of his electrified sulphur globe for light bodies in its vicinity, but his explanation of the phenomenon was rather metaphysical than physical.”