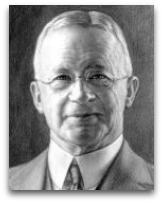 In science, Fielding Garrison (1870-1935) was an American physician, librarian, and science historian noted 1909 four-part series article “Josiah Willard Gibbs and his Relation to Modern Science”, wherein he gives a very cogent and condensed history of thermodynamics up through chemical thermodynamics, centered around the work of American engineer Willard Gibbs, along the way giving many telling details, e.g. Garrison seems to coin the term “van’t Hoff school”, among many other interesting details and discerning insights. [1] In 1910, Garrison discusses Gibbs in relation to Goethe, the connection of which, as he says, which "seems so plausible and fascinating". [2]

Chemical thermodynamics | History
In 1909, Garrison, in his four part article “Josiah Willard Gibbs and his Relation to Modern Science”, gives one of the best short histories of early chemical thermodynamics; a truncated statement of "1873" with the independent publications of Horstmann and Gibbs being stated as follows:

“In October, 1873, Horstmann announced the condition for chemical equilibrium to be that of maximum entropy, and in December of the same year Gibbs, in a modest footnote, stated that the condition for thermodynamic equilibrium in a chemical system at constant temperature and pressure is that the function now universally known as the thermodynamic potential should be a minimum.”

The following, from Garrison’s part IV (Ѻ) on Gibbs, is informative:

“The naturalist Haeckel has explicitly denied the doctrine of universal increase of entropy142 because, pointing as it does to the ultimate thermal death of different worlds, it conflicts with his monistic conception of the universe as a perpetuum mobile, consisting of infinite substance in eternal motion, without beginning and without end. Yet the cosmogony of Kant and Laplace, which Haeckel accepts, points to the same conclusion as well as to formative periods in the history of the solar and sidereal systems, in which entropy decreases, and energy, instead of dissipating, tends, after a maximum of degradation, to concentrate. Even possibilities of this kind put the second law on a lower plane of probability than the first as far as man is concerned, unless it be that the irreversible processes of nature are in reality cyclic, in which case we should have Nietzsche's "eternal return" of all things. But as Bumstead has so admirably said, " It is nearer the truth to base the doctrine of entropy upon the finite character of our perceptions than upon infinity of time."

In connection with the validity of the second law arises the important question of the extent of its application to animate nature and whether it is capable of reversal in vital processes. "The first law (conservation of energy) has been proven," says Otwald, "with an exactness of 1:1,000 even for physiological combustion (including mechanical and psychical work performed)." The second law, whether in the Clausius form of increase of entropy, the Kelvin form of dissi\Vc have formulas and tables; we make use of thermodynamics and the differential calculus; but this is for the most part a vain show. Long before we reach the point where the formula is to be tested experimentally we slip in a simplifying assumption: that the concentration of one component may be considered as a constant; that the heat of dilution is zero; that the solute may be treated in all cases as though it were an indifferent gas; that the concentration of the dissociated portion of a salt may be substituted for the total concentraIion; etc., eIc. The result is that our calculations apply at best only to limiting or ideal cases, where an error in deducing the formula may be masked by errors in observation. Helmholtz did not do this, but Ilelmholtz is considered old-fashionod." W. D. Bancroft, ./. Phys. Chem., 1899, III., 604.

pation of available energy, or the Gibbs-Helmholtz form of decrease of free energy, is assumed by recent physiologists to be characteristic of all spontaneous or metabolic processes, but both Helmholtz143 and Kelvin144 have doubted whether it is either necessary or sufficient for their production, while Maxwell145 and Boltzmann140 have asserted, what Gibbs's statistical researches seem to prove, that it is sometimes possible for entropy to decrease, that is for small isolated temporary violations of the second law to occur in any real body. Has animal or vegetable protoplasm ever the power ascribed to Maxwell's demon of reversing the thermodynamic order of nature, and directing physicochemical forces? Such a demon, according to Lord Kelvin, might, through his superior intelligence or motor activity, render one half of a bar of metal glowing hot, while the other half remained icy cold. We have something analogous to this in certain diseases, as gangrene, aphasia, various forms of paralysis, the curious vasomotor and trophic disorders of the nervous system. Are these phenomena then of a thermodynamic nature? The animal body, Lord Kelvin thought, does not act like a thermodynamic engine, but "in a manner more nearly analogous to that of an electric motor working in virtue of energy supplied to it by a voltaic battery." Here, as Gibbs has shown in his theory of the chemical cells, the electromotive force would be identical with the free energy upon which the surface energies of the body must ultimately depend. Beyond these speculations we know nothing. Gibbs himself avowed his express disinclination to "explain the mysteries of nature," while Lord Kelvin, although affirming that physicists are bound "by the everlasting law of honor," to explain everything material upon physical principles, mystified friends and opponents alike by falling back upon a "vital principle" with "creative power" behind it as the causa causans of biological happenings. But the business of physics is with the material facts of the universe, and the invocation of creative power explains nothing and is subversive of determinism, or the relation of cause and effect in science. It may be that "man was born too late to ascertain final causes": he can only interpret the physical facts of his experience as he finds them and with the means at his disposal. An interesting attempt to explain the relation of life and mind to matter is found in the energciiscllc Weltanschauung.

or energetic philosophy of Ostwald, which confessedly derives147 from the thermodynamic argument of Gibbs, but should not be confused with the latter. Gibbs was concerned only with applying the laws of mechanics to physical chemistry. Compared with the case of nature, he says, thermodynamic systems are "of an ideal simplicity." To Ostwald, however, mind and matter are but forms of energy, which is the only thing eternal and immortal. "We can deal with measurable things, never with the unknown heart of nature," says Ostwald, yet his basic principle, energy, is to all intents and purposes identical with the eternal infinite substance of Spinoza, Goethe and Haeckel, "sive Deus, sive Natura naturans, sive Anima mundi appelletur." Matter, in Ostwald's scheme, is a group of energies in space; thought becomes a mode of energy involving evolution of heat, and "the problem of the connection between body and spirit belongs to the same series as the connection between chemical and electrical energy, which is treated in the theory of voltaic chains."148 Falling in love, listening to a Beethoven symphony, identifying oneself with nature, are to Ostwald instances of dissipation of energy like any other.149 Philosophy of this kind does not clear up the mystery of the relation of mind and matter. Descartes assumed that mind and matter exist apart as parallels, having no causal connection with each other. Spinoza held that neither can exist apart; indeed, he sometimes asserts their practical identity as different modes of the same eternal substance. But however intimately they may be associated, no scientist or philosopher has yet proven, whether in the body of man or in the origin of the universe, that one is either the cause or the effect of the other.

Assuming matter in mass to be ultimately made up of rotational, vortical or gyrostatic stresses or of energies, whether kinetic or potential, we encounter the formidable objection of Boltzmann, that it seems illogical, not to say unmechanical, to postulate motion as the primary idea with the moving thing as the derived one. Motion of what? we have a right to ask, since Ostwald disdains the ether of the physicist?.150 Matter, in the words of Sir Oliver Lodge, may be physically resolved "perhaps, into electricity, and that into some hitherto unimagined mode of motion of the ether," but no dynamic theory of the ether can resolve the ether into nothing. Assuming thought to be a mode of energy, the metaphysical argument that mind is at the bottom of motion seems more likely, in the last analysis, than that motion should be the cause of mind, for we can not conceive of a thing moving unless something moves it. Mind seems almost like an assemblage or complex of causes in itself, and is probably related to the brain as music to the violin. Destroy the violin and there will be an end of its music, but it needs other coefficients than the violin itself to get music out of it. Ostwald has himself admitted the force of Leibnitz's argument, that no mechanical explanation of cerebral action will ever account for the genesis of thought or the nature of consciousness: "Nihil in intellectu quod non prius in sensu, nisi intellectus ipse." Individual thinking may be the result of physico-chemical differences of structure or substance in the brain, but apart from the evidence of mind in the evolution and structure of the universe, different aspects of mind, as ideas, sensations and sentiments, seem to have an individual life of their own so far as man is concerned, and are "things" in the sense that, like external forces, they have profoundly influenced and determined the actions of individuals and of entire races. Human thought as a function of the human brain may disappear with man himself, but this does not annul the possibility of mind existing in manifold ways elsewhere in the universe. The electric waves of wireless telegraphy undoubtedly existed as motions in the air before man discovered and labeled them and may continue to exist and be apprehended in other spheres of thought when man is gone.”

In 1910, Garrison, “A Note on Traube’s Theory of Osmosis and ‘Attraction-Pressure’”, on German thinker Johann Goethe’s 1809 novella Elective Affinities, comments that Goethe's theory of human elective affinities seems so “plausible and fascinating”: [2]

“Suppose chemical substances to be represented by a number of men and women of varying degrees of strength of character and ‘attractiveness’, and suppose the marital combinations or what Goethe called the ‘elective affinities’ between these men and women to be determined by certain mysterious ‘laws’. If a man strong in character should mate with a woman, weaker but otherwise ‘attractive’, or vice versa, one set of observers might affirm that the union was due to the man's superior potentiality or masculinity, others might maintain that the real strength in the combination or ‘affinity’ lay in the woman's ‘attractiveness’; or vice versa. Curiously enough, these anthropomorphisms, which seem so plausible and fascinating in Goethe's novel, are daily and hourly employed to explain the facts of chemical combination.”

Garrison, interestingly, goes on to discuss this in relation to Gibbs’ version of physical chemistry.

Thermodynamic surface
Garrison, in regards to the history of development of "thermodynamic surfaces", indicates that there may have been up to six possible plaster surfaces made by James Maxwell, sent out to various associates, including Gibbs, in a riddled style of correspondence. [5]