In hmolscience, founding fathers fallacy refers to the over-common, albeit misaligned, assertion, that the founding fathers of America were Christian and that American was founded as a "Christian nation". Correctly, in the US Constitution, the founding document of America, the word "god" is NOT found; moreover, the First Amendment (1791) prohibits such integration.

Founding Fathers | List
The following is a meta-analysis ranked listing of the "founding fathers" of America:

Overview
It is frequently asserted, amid religious vs atheism discussions, that America was founded on the Bible and or Christianity. This, however, is incorrect.

“Since disbelief remains a taboo topic, the pattern that people usually called ‘great’ tend to be religious skeptics, is rarely mentioned. Church men generally contend that great figures in history, such as America’s founders, were conventional worshipers. That’s untrue. ‘One of the embarrassing problems for the early nineteenth-century champions of the Christian faith was that not one of the first six presidents of the United States was an orthodox Christian’, philosopher and educator Mortimer Adler and a team of Encyclopedia Britannica writers said.”

In 2014, Matthew Stewart, in his Nature’s God: the Heretical Origins of the American Republic, traced the origins of the secular nature of the founding fathers; the abstract of which is as follows: [8]

“America’s founders intended to liberate us not just from one king but from the ghostly tyranny of supernatural religion. Drawing deeply on the study of European philosophy, Stewart brilliantly tracks the ancient, pagan, and continental ideas from which America’s revolutionaries drew their inspiration. In the writings of Spinoza, Lucretius, and other great philosophers, Stewart recovers the true meanings of “Nature’s god,” “the pursuit of happiness,” and the radical political theory with which the American experiment in self-government began.”

Declaration of Independence
The following shows the famous 28 Jun 1776 presentation of the Declaration of Independence, the declaration itself penned by Thomas Jefferson, by the so-named Committee of Five (Ѻ)(Ѻ), the three main committee members, namely Jefferson, John Adams, and Benjamin Franklin shows with their respective Haught disbeliever rankings, of the top 64 disbelievers of history: 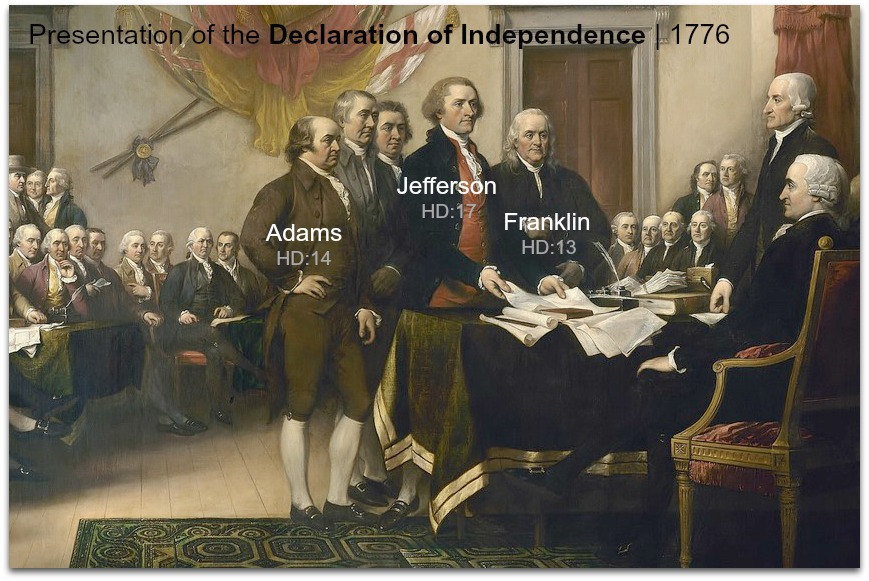 Signing of the Constitution
The following depicts the scene at the 17 Sep 1787 scene (Ѻ) at the signing of the Constitution of the United States, following its 1776 “Declaration of Independence”, by the newly formed 13 American colonies, from Great Britain, with key players, namely William Hamilton, Benjamin Franklin, James Madison, the architect of the constitution, who used Newtonian government as the foundation of its structure, and Thomas Jefferson, the first American President, along with respective Haught disbeliever rankings shown below Franklin and Madison: 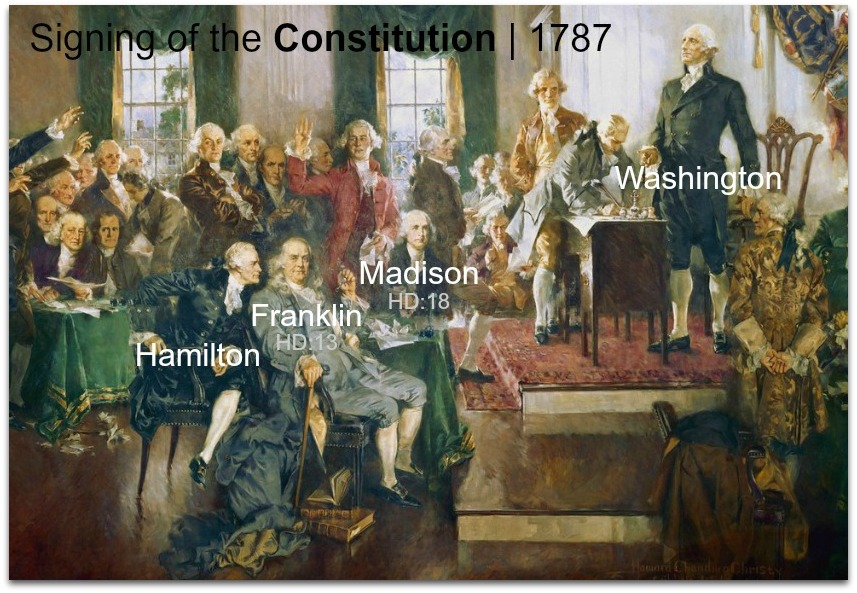 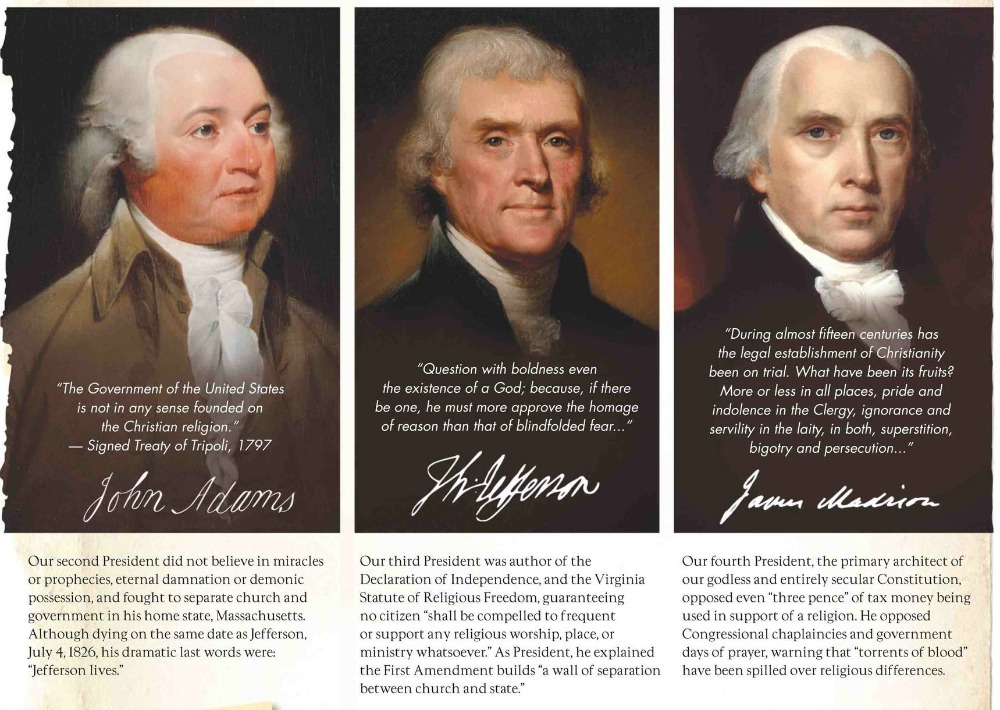 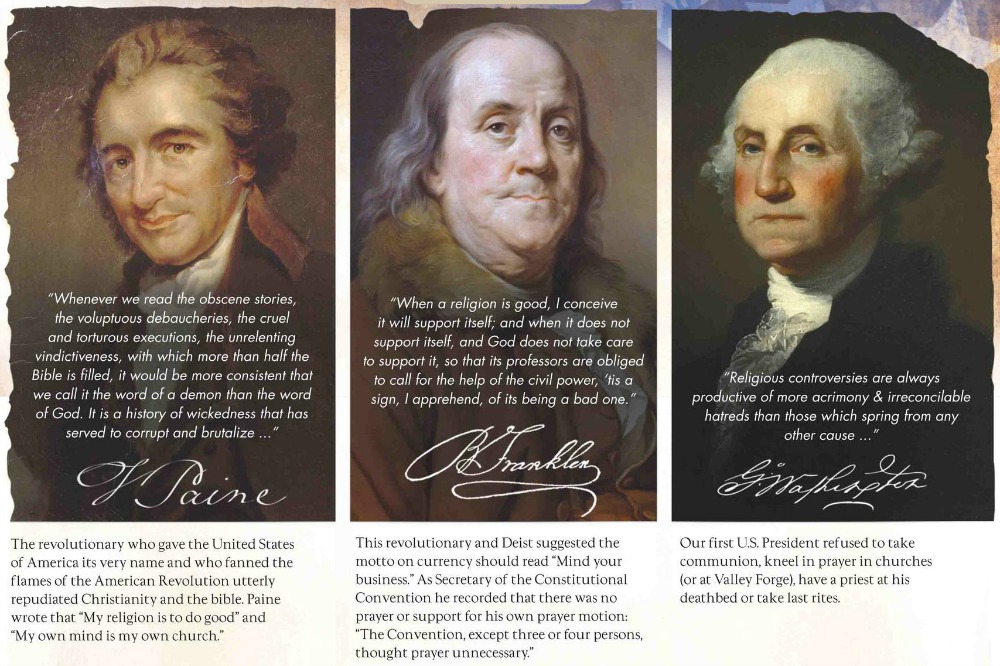