In science, four elements (TR:75), as compared to three element theory (Heraclitus, 500BC), refers to the belief that the universe is comprised of four "elements" (Plato, 375BC) or "roots" (Empedocles, 445BC), namely: earth, air, water, and fire: 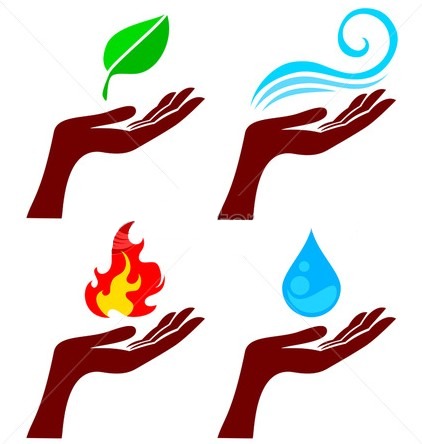 along with a fifth carrier-like element "ether", according to some models.

History
In 3100, Egyptian thinkers conceptualized a three-element model of the cosmos, having originally been "water", out of which "earth" (land mound or Nun) arose, from which "fire" (sun or Ra) burst forth, the logic of which may possibly be found in the 2600BC writings of Imhotep, regarding the Heliopolis creation myth, out of which "air" (Shu) and "moisture" (Tefnut) were engendered, albeit all conceptualized at types of gods.

In 600BC, Greek philosopher Thales of Miletus, who is attributed by Aristotle to have been the first philosopher in the Greek tradition, was the first to initiate the study of Egyptian philosophy, and or Egyptian mythology, of nature, by himself traveling to Egypt.

Here, Thales learned, according to Heliopolis creation myth, and its derivatives, that water came first, out of which earth and fire came next, and later wind, albeit in the form of the gods: Nun, Ptah, Ra, and Shu, respectively. Thales, according to most accounts, scraped the gods, but held to the four element theory, or at least held to the model that "all is water", out of which all else proceeds. [1]

In c.455BC, Empedocles, student of the Milesian school, was the first, according to Plato (375BC), to have formulated the "four elements" doctrine; who in turn assembled the list as a type of unified theory, from the thinkers before him, namely: Thales (575BC), who regarded “water” as the primordial element, Anaximenes (550BC) “air”, Heraclitus (475BC) “fire”, and Parmenides (475BC) or the Eleatics “earth”. (Ѻ)

In 77AD, Pliny the elder, in his Natural History, summarized the then-prevalent, mostly Aristotle based, four element theory, as follows: [2]

“I do not find that any one has doubted that there are four elements. The highest of these is supposed to be fire, and hence proceed the eyes of so many glittering stars. The next is that spirit, which both the Greeks and ourselves call by the same name, air. It is by the force of this vital principle, pervading all things and mingling with all, that the earth, together with the fourth element, water, is balanced in the middle of space. These are mutually bound together, the lighter being restrained by the heavier, so that they cannot fly off; while, on the contrary, from the lighter tending upwards, the heavier are so suspended, that they cannot fall down. Thus, by an equal tendency in an opposite direction, each of them remains in its appropriate place, bound together by the never-ceasing revolution of the world, which always turning on itself, the earth falls to the lowest part and is in the middle of the whole, while it remains suspended in the centre, and, as it were, balancing this center, in which it is suspended. So that it alone remains immoveable, whilst all things revolve round it, being connected with every other part, whilst they all rest upon it.”

In 1804, Percy Shelley, age 14, entered Eton College, during which time he translated half of Pliny’s Natural History, spent his money on books, chemical instruments, and acts of liberality; one of his oft-spoken pronouncements during this time was: [4]

“Nothing ever delighted me so much as the discovery that there were no elements of earth, fire, or water.”

“Let those philosophers disappear, who attribute natural corporeal principles to the intelligence attached to matter, such as Thales, who refers everything to water, Anaximenes to air, the Stoics to fire, Epicurus to atoms, that is to say, to infinitely small objects that can neither be divided nor perceived.”