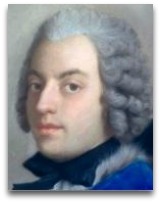 In human physics, Francesco Algarotti (1712-1764) was an Italian natural philosopher noted for his 1737 book Newtonianism for the Ladies, in which he "employs the inverse square law to calculate the power of attraction between a pair of separated lovers". [1]

Overview
In 1737, Algarotti, in his Newtonianism for the Ladies, is said to have used Newtonian mechanics to develop or outline a theory of love. [2] Algorott, in short, conceptualized attraction between two people as being proportional to the inverse of their respective distance of separation squared:

meaning that, according to Algarotti, love, the the attraction of passion, falls off with distance of separation. This is equivalent, in some sense, to the modern saying “different area codes, different rules” aka the “area code rules” (Ѻ) of urban relationship folklore.

Education
Algarotti studied natural sciences and mathematics and the University of Bologna. Algarotti in 1728 studied natural sciences and mathematics under Cartesian-turned-Newtonian follower Francesco Zanotti, at the University of Bologna, and so naturally enough, in his 1737 book Newtonianism for the Ladies, considering people as like celestial bodies, modelling their interaction via celestial mechanics. [4]

Associates | Students
Algarotti was a friend and associate of Voltaire, and, along with Daniel Bernoulli, among others, was one of the mathematics and physics teachers of Emilie Chatelet. [3]