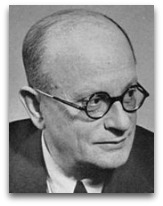 In existographies, Francis Simon (1893-1956) was a German-born British chemist and physicist, noted for []

Overview
In 1944, Simon critiqued Erwin Schrodinger’s premise that ‘life is anything that feeds on negative entropy”, from his What is Life? Lecture, by pointing out that diamonds are types of highly-ordered carbon states, or “negative entropy” things, as Schrodinger phrases things, but fact that animals don’t eat diamonds, obviates his point; Schrodinger, in his Note to Chapter 6, commented to this criticism as follows:

“Simon has very pertinently pointed out to me that my simple thermodynamical considerations cannot account for our having to feed on matter 'in the extremely well-ordered state of more or less complicated organic compounds' rather than on charcoal or diamond pulp. He is right. But to the lay reader I must explain that a piece of un-burnt coal or diamond, together with the amount of oxygen needed for its combustion, is also in an extremely well-ordered state, as the physicist understands it. Witness to this: if you allow the reaction, the burning of the coal, to take place, a great amount of heat is produced. By giving it off to the surroundings, the system disposes of the very considerable entropy increase entailed by the reaction, and reaches a state in which it has, in point of fact, roughly the same entropy as before. Yet we could not feed on the carbon dioxide that results from the reaction. And so, Simon is quite right in pointing out to me, as he did, that actually the energy content of our food does matter; so my mocking at the menu cards that indicate it was out of place. Energy is needed to replace not only the mechanical energy of our bodily exertions, but also the heat we continually give off to the environment. And that we give off heat is not accidental, but essential. For this is precisely the manner in which we dispose of the surplus entropy we continually produce in our physical life process.”

Education
Simon completed his PhD, at the University of Berlin, working in the research group of Walther Nernst on low-temperature physics related to the heat theorem, i.e. third law of thermodynamics.

Quotes | On
The following are quotes on Simon:

“What don’t organisms live by eating diamonds? This question was raised by F. Simon, who pointed out to Schrodinger that his simple thermodynamical considerations cannot account for our having to feed on matter in the extremely well-ordered state of more or less complicated organic compounds rather than on charcoal or diamond pulp, which are crystalline substances with regular molecular order, and consequently, have little or no entropy.8 After all, according to thermodynamic principles, organisms could make their living by eating carbon or diamond pulp (for negative entropy), and absorbing energy as heat directly from its surroundings, say, by taking up residence inside a volcano. But they do not. So there may be something special about the precise form, or quality, of energy that is taken up, or how that energy is taken up by living systems that perhaps enables them to build organization, which is not the same as crystalline order. For one thing, the former is dynamic through and through, whereas the latter is static.”