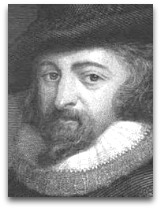 Education
At age 13, Bacon's mind had revolted against the accepted doctrines, supposedly attributing the sources of error to Aristotle. [10]

Aristotle | Final cause
In 1605, Bacon, in his The Advancement of Learning, he dug into the inherent error surrounding final causes.

Of Atheism
In 1597, Bacon penned his essay “Of Atheism”, which is filled with a number of frequently cited atheism quotes (Ѻ);

“Nay, even that school which is most accused of atheism doth most demonstrate religion; that is, the school of Leucippus and Democritus and Epicurus. For it is a thousand times more credible, that four mutable elements, and one immutable fifth essence, duly and eternally placed, need no God, than that an army of infinite small portions, or seeds unplaced, should have produced this order and beauty, without a divine marshal.”

The following are other related Bacon atheism quotes:

“Atheism leads a man to sense, to philosophy, to natural piety, to laws, to reputation, all which may be guides to an outward moral virtue, though religion were not but superstition dismounts all these, and erecteth an absolute monarchy in the minds of men.”

Bacon, supposedly, claimed to be a believer, but the way he put emphases on nonsupernatural causation, according to Kerry Walters (2010), “pushed god into the background and prepared the way for materialism and overt rejection of god belief”. (Ѻ)

Enlightenment
Bacon is sometimes classified as one so-called “fathers of the enlightenment”, along with Benedict Spinoza, Rene Descartes, John Locke, Isaac Newton, Voltaire, among a few others; many of the latter being indirect proteges of Bacon and his philological pursuits. (Ѻ)

Tree of knowledge
Bacon, in his 1605 Advancement of Learning, was the first to make reference to the division of knowledge being like the branches of a tree or what has since come to called the "tree of knowledge". [7]

Heat
The following is his noted quote on the matter which comes from extracts of the twentieth aphorism of the second book of the 1620 publication New Instruments (Novum Organum): [2]

“Heat itself, its essence and quiddity, is motion and nothing else.”

This is one of the first statements of what would come to be known in the early 19th century as the kinetic theory of heat.

Goethe | Elective affinity
In 1620, Bacon developed theories on chemical affinity to explain the inherent nature of motion and its causes. Bacon reasoned that ‘dispute and friendship are the spurs to motion in nature, and the keys to her works.’ [4] Bacon defined chemical affinity as such: [5]

“It is certain that all bodies whatsoever, though they have no sense, yet they have perception; for when one body is applied to another, there is a kind of election to embrace that which is agreeable, and to exclude or expel that which is ingrate; and whether the body be alterant or altered, evermore perception precedeth operation; for else all bodies would be like one to another.”

This logic, naturally, evolved into a conception of elective attraction or elective affinity, defined as ‘a favorable inclination to one more than to another’ or a process in which ‘a substance tends to combine with certain substances in preference to others.’ [6]

It is known that Benedict Spinoza studied Bacon and in turn Goethe studied Spinoza, but it remains to be discerned if Goethe culled directly from Bacon as in the above "election to embrace" model. [8]

Quotes | On
The following are quotes on Bacon:

“Bacon was the wisest, brightest, meanest of mankind.”

“It is generally allowed that Lord Bacon of Verulam comprehended nearly the whole circle of human knowledge at the period in which he lived, and foresaw most of the discoveries which have since been made. He laid the foundation of an encyclopedia, and was very near discovering various important philosophical results, such as the weight of the air, &c.”

Quotes | By
The following are noted quotes by Bacon:

“Truth emerges more readily from error than from confusion.”

“The worst of all things is defied error.”

“Truth is the daughter of time.”

“We are much beholden to Machiavelli and others who write what men do and not what they ought to do.”

“The first question concerning the celestial bodies, is whether there be a system, i.e., whether they world or universe compose altogether one globe, with a center; or whether the particular globes of earth and the stars be scattered dispersedly, each on its own roots, without any system or common center.”

“If it be granted that the earth moves, it would seem more natural to suppose that there is no system at all, but scattered globes, than to constitute a system of which the sun is the center.”

“We ought to make a collection of particular history of all monsters and prodigious births or productions, and in a word of every thing new, rare, and extraordinary in nature. But this must be done with the most severe scrutiny, lest we depart from truth. Above all, every relation must be considered as suspicious, which depends in any degree upon religion, as the prodigies of Livy: and no less so, everything that is to be found in the writers of natural magic or alchemy, or such authors, who seem, all of them, to have an unconquerable appetite for falsehood and fable.”

“It is certain that all bodies whatsoever, though they have no sense, yet they have perception; for when one body is applied to another, there is a kind of election to embrace that which is agreeable, and to exclude or expel that which is ingrate; and whether the body be alterant or altered, evermore a perception precedeth operation; for else all bodies would be like one to another. And sometimes, this perception, in some kind of bodies, is far more subtle than sense; so that sense is but a dull thing in comparison of it: we see a weatherglass will find the least difference of the weather in heat or cold, when we find it not. And this perception is sometimes at a distance, as well as upon the touch; as when the loadstone draweth iron; or flame naphtha of Babylon; a great distance, as well as upon the touch; as when the loadstone quiry, to enquire of the more subtile perceptions; for it is another key to open nature, as well as the sense; and sometimes better. And besides, it is a principal means of natural divination; for that which in these perceptions appeareth early, in the great effects cometh long after.”