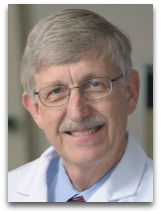 In hmolscience, Francis Collins (1950-) (CR:5) (CIR:17) is American geneticist note for 2000 to 2006 self-described "taking a public bath" outpourings of his his faith + science blended beliefs and convictions, sparked into the public sphere in the wake of the announcement of the completion of human genome mapping project.

Religion
Collins culled his views on God from Irish-born British writer C.S. Lewis, and atheist (15) turned theist (31) turned Christian (33) and his theory of “universal morality” as presented in his works such as the The Chronicles of Narnia.

In Jun 2000, Craig Venter’s group announced they had completed a working draft of the human genome. (Ѻ) Collins, at this juncture, standing alongside Bill Clinton, Venter, made the following announcement:

“The working draft of the human genome is a humbling and awe-inspiring glimpse into our own instruction book, previously known only to god.”

This “moment”, as Collins reflected in 2006, caused him to begin to talk more publicly about his faith and to write his 2006 book The Language of God: A Scientist Presents Evidence for Belief; he comments, in reflection on this engagement, amid all of the email praise and condemnent Collins surmised that the experience was something akin to bathing publicly naked:

Collins holds the view, as outlined in his book, that after evolution had prepared a sufficiently advanced “brain”, that at some point god gifted humanity with the knowledge of good and evil, what he calls the “moral law”, with free will, and an immortal soul, and that some humans use their free will to break the moral law, leading to an estrangement from god, for which Jesus is the solution.

Stem cells | Embryos
In regard to stem cells, Collins considers embryos created via somatic-cell nuclear transfer to be distinct from those formed through the union of sperm and egg, the former being “not part of God’s plan to create the human individual”, the latter being “very much part of God’s plan.” [2] In 2006, in interview with Steven Paulson (Ѻ), Collins stated:

“I believe that the product of a sperm and an egg, which is the first cell that goes on to develop a human being, deserves considerable moral consequences. This is an entity that ultimately becomes a human. So I would be opposed to the idea of creating embryos by mixing sperm and eggs together and then experimenting on the outcome of that, purely to understand research questions. On the other hand, there are hundreds of thousands of such embryos in freezers at in vitro fertilization clinics. In the process of in vitro fertilization, you almost invariably end up with more embryos than you can reimplant safely. The plausibility of those ever being reimplanted in the future, more than a few of them, is extremely low. Is it more ethical to leave them in those freezers forever or throw them away? Or is it more ethical to come up with some sort of use for those embryos that could help people? I think that's not been widely discussed.”

Debates
When pressed about the scientific details of his belief in soul and resurrection, according to Sam Harris (Ѻ), he deflects the question to consultation of English theoretical physicist and priest John Polkinghorne and English bishop N.T. Wright, whose work, according to Harris is “pure madness, a bizarre conflation, a word salad”. Collins is described by Paul Myers (2009) as a “lovable dufus” when it comes to issues of religion and some scientific principles (Ѻ).

Quotes | Employed
The following are quotes cited by Collins in his effort to find a basis on which to assert his soul beliefs:

“If the origin of the human body comes though living matter which existed previously, the spiritual soul is created directly by god.”

“New findings lead us toward the recognition of evolution as more than a hypothesis.”

“A lot of scientists really don't know what they are missing by not exploring their spiritual feelings.”