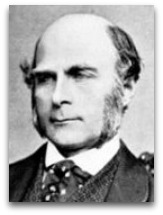 In existographies, Francis Galton (1822-1911) (IQ:145|#714) [RGM:294|1,500+] (Becker 160:123) [CR:51] was an English anthropologist, half-cousin to English naturalist Charles Darwin, noted for being in the first-ever person to be assigned with a IQ of 200, and for having dialogue, in 1879, with Scottish physicist James Maxwell on the topic of free will and also for his interest in hearing Scottish physicist William Thomson’s lecture on Maxwell’s demon at the Royal Institute, and likely later commentary on the matter. [1]

Galton’s 1869 book Hereditary Genius is said to be the first scientific attempt to study genius and greatness. [2] American psychologist Lewis Terman, one year after inventing the modern 100 point IQ scale (1916), average IQ being 100, assigned Galton with the first-ever, psychologist-determined, "200 IQ". Specifically, as discussed in his 1917 article “The Intelligence Quotient of Francis Galton in Childhood,” Terman states that his team has studied many thousands of children in several cities and several counties in California, and found only a handful above IQ=150, the highest being IQ=170. Terman summarizes: [3]

“From the evidence given, one is justified in concluding that between ages of three and eight years, at least, Francis Galton must have had and intelligence quotient not far from 200.”

Education
At age four, a day before his fifth birthday, he wrote out the following summary of his abilities: [5]

“I am four years old and I can read any English book. I can say all the Latin substantives and adjectives and active verbs besides fifty-two lines of Latin poetry. I can cast up any sum in addition and can multibly by 2, 3, 4, 6, 8, 9, 10, 11. I can also say the pence table. I read French a little and know the clock.”

By age six he was already being described as a prodigy, for his abilities, such as reading Shakespeare’s works for pleasure, reading each page twice, and repeating it by heart. At age 13, he designed a steam-engine driven flying machine. Galton began medical school at age 15. [3]