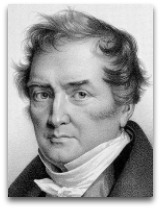 In hmolscience, Francois Broussais (1772-1838) was a French surgeon, general pathologist, philosopher, and asoulist noted for his his moral theory investigations.

Overview
In 1814, Broussais began to promulgate his views on the relation between life and stimulus, and on the physiological interdependence and sympathies of the various organs.

Broussais, at some point, denied the existence of the soul, on the basis that he never found one in the corpses one dissects (e.g. pineal gland of the Cartesian soul; the heart of the Egyptian soul, etc.) (Ѻ)(Ѻ); a view similar to Napoleon Bonaparte and his surgeon soul queries.

Broussais, while attacking the spiritualists of his time, simultaneously denied he was a materialist and an atheist. (Ѻ)

Propositions
The following, from Broussais' An Outline of the Association of Ideas, seem to be of note:

“The will is that state of the brain, attendant upon vivid sensations or ideas, concomitant with desires and aversions, and that excites us to action; it is as real as the sensations or ideas, and as really corporeal. For instance, that sensation called hunger does not arise, when the stomach is completely satisfied, and therefore it depends on the state of the bodily organs. I see before me on the table, a piece of roast beef, a knife, fork and plate: if my stomach needs food, the sensation accompanying these visible images, will be associated with hunger: if the stomach be satisfied it will not. If it be accompanied by hunger, the desire, wish, will or volition to eat, and the consequent motions to carry that volition into effect, will take place not otherwise. That desire, therefore, is a state of the brain dependent on the excited state of the bodily organs that act by transmitted excitement, that is, by innervation, on the encephalon. It is a peculiar state of the brain associated with a peculiar state of the stomach. All desires and aversions, wishes and volitions when analyzed will in like manner be found nothing more than modifications of cerebral motion arising from the circumstances that excited the motions themselves.”

“I know nothing approaching to satisfactory proof of any innate moral sense. It is one of the dreams of the ontologists and metaphysicians.”

Quotes | About
The following are quotes on or about Broussais:

“Cabanis is the true master of Broussais, because for him, the moral is only the physical considered under certain particular points of view.”

“My intention is to rescue ‘the physical and moral science of man’ from the obfuscations and obscurities of those who seek to ‘plunge us once again into the illusions of chimeras of ontology’.”

“It is no more ‘just’ to punish an assassin than a tiger.”