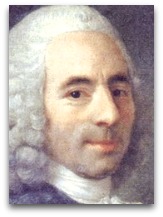 Overview
In 1747, Quesnay, in his Essay on the Physics of Animal Economics, a treatise dedicated (Ѻ) to establishing the physical and chemical foundation of the nutrition, generation, and sensitivity of organisms, attached to the second edition an addendum entitled “Treatise on Fire”, wherein he posits, according to Mettrie (1745), that heat and cold play the main role in the formation of bodies. [1]

Influence
Quesnay was influential to Adam Smith, who began to read his work in 1764 while in France.

Quotes | On
The following are quotes on Quesnay:

“Never before had thinking in political economy reached such heights of genius.”

“To secure the greatest amount of pleasure with the least possible outlay should be the aim of all economic effort.”

“Calculations are to the economic science what bones are to the human body. Without them it will always be a vague and confused science, at the mercy of error and prejudice.”