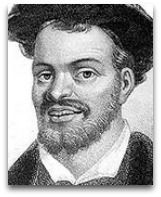 Overview
In c.1532, Rabelais published the first volume of his pentalogy The Life of Gargantua and Pantagruel, wherein he tells the funny adventures of two giants, Gargantua and his son Pantagruel, full of “messy carousing, unceremonious sexual adventures, excretions, and general muck”, wherein many people make fun of priests, scripture, Church hierarchy and ritual. [1]

The philosophy of the son, Pantagruel, is called "Pantagruelism", is rooted in "a certain gaiety of mind pickled in the scorn of fortuitous things", which seems to be code for Epicureanism (see: fortuitous atoms).

In 1942, Lucien Fabvre, in his The Problem of Unbelief in the Sixteenth Century: the Religion of Rabelais, asserted nobody, Rabelais included, before Rene Descartes (c.1620), could have been “real atheist”, per reason that people labeled as atheists prior to Descartes were the result of historians “impressing modern values on the past”, and that the label “atheist” in these days was used a way to insult one another. [2]

Associates
Rabelais was a friend of Etienne Dolet.

Influence
Honore Balzac was a student of Rabelais. [4]

Quotes | On
The following are quotes on Rabelais:

“Who can, with so much learning write, that now we have at last in France, Democritus reborn, whose lance cuts through the schoolmen’s murky light.”

“The writings of Rabelais are often considered to afford the first instance of religious skepticism in the French language.”

“There has been a considerable number of those whom history calls atheists. Leucippus, Democritus, Xenophanes, and others of the Atomistic and Eleatic Schools, are said to have been such. In his Intellectual System, Cudworth puts into this category: Seneca and the younger Pliny among the Romans. Since the Reformation, such men as: Rabelais, Machiavel, Bruno, Vanini, D'Alembert, Diderot, Buffon, Condorcet, Mirabeau, La Place, Frederick II, and even Pope Leo X, have been charged with atheism.”

Quotes | By
The following are quotes by Rabelais:

“Sleep, gluttony, wine, women, jest, and jibe: these were my gods, my only god, when I was alive.”