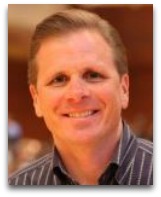 In existographies, Frank Turek (c.1960-) (CR:2) is an American Christian apologeticist noted for several books wherein he uses the second law, expanding universe, radiation afterglow, galaxy seeds, and general relativity, as debate tools (Ѻ), to argue for intelligent design and the existence of god and against evolution.

Education
Turek has a MA in public administration from George Washington University and a PhD in apologetics from Southern Evangelical Seminary.

Notes
In 2011, Turek was fired (Ѻ) from both Cisco and Bank of America for his anti-gay marriage publications, his 2008 Correct, Not Politically Correct; How Same-Sex Marriage Hurts Everyone, in particular, being that his views were not in alignment with company values.

Hitchens | Debate
The following are noted quotes from Turek's 2008 debate with Christopher Hitchens:

He said there are arguments for the beginning of life that are naturalistic. Not according to the people who are studying the matter. How about Francis Crick? If I could find his quote here,... Francis Crick said, “Every time I write a paper on the origin of life, I swear I will never write another one because there’s too much speculation running after too few facts.”

Shermer | Debate
The following are noted quotes from Turek's 2018 debate with Michael Shermer:

“How can we reason if we’re just molecules in motion [If naturalism is true, how can we even reason if we are just chemicals and motion?]? If we’re just ‘moist robots’, why should anybody believe what I say or you say? If every thought I have is a result of a previous natural cause over which I have no control and the same for you?”