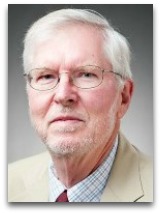 In thermodynamics, Frank Albert Weinhold (1941-) is an American chemist noted for his 2009 Classical and Geometrical Theory of Chemical and Phase Thermodynamics, which, supposedly, is the first authoritative textbook presentation of equilibrium chemical thermodynamics and phase thermodynamics in a reformulated geometrical framework—possibly a treatise on simplified graphical thermodynamics—expressed with only elementary high school level geometry concepts, instead of the standard fare partial differential equation calculus-based thermodynamics expositions.

The book contains interesting biographical sections, such as on, for course, Willard Gibbs, the founder of graphical thermodynamics; but also on other background mathematicians, such as sections on explaining the influence of the mathematics of space and of the physical forces work of German mathematician Bernard Riemann (1826-1866) on the thermodynamics and relativity theories of German-born American physicist Albert Einstein. [1]

Education
Weinhold completed his BA in 1962 at the University of Colorado, Boulder, and his AM in 1964 and PhD in 1967 at Harvard University, the latter with a dissertation on “Reduced Density Matrices of Atoms and Molecules”. Weinhold held postdoctoral and teaching appointments at Oxford, Berkeley, and Stanford before joining the chemistry department at the University of Wisconsin-Madison in 1976, where he presently is professor emeritus.

“Gibbs’ thermodynamic papers—difficult, abstract, and buried in an obscure journal on the fringes of European scientific awareness-remained for a time virtually unknown except among a small circle of admirers. Fortunately, the latter included physicist James Maxwell, who advocated effectively for Gibbs’ insights and methods. Major centers of Gibbsian influence began to appear in Germany, Holland, and elsewhere, as Nobel Prizing winning careers were launched from a passing remark or footnote in Gibbs’ monumental masterpiece.”