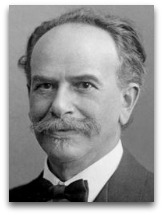 In hmolscience, Franz Boas (1858-1942) (Simmons 100:14) (CR:4) was a German-born American physical geographer, a , noted for his application of physics to geographical aspects of anthropology—therein developing “physical anthropology”, so to say; in short, he superimposed the criteria of the physical sciences unto cultural anthropology, employing materialistic convictions throughout.

Boas, in more detail, says the following, in an 1882 letter “Psychic Life from a Mechanistic Viewpoint”, sent to his uncle, about these university years: [2]

“The objectives of my studies shifted quite a bit during my university years. While in the beginning my intention was to regard mathematics and physics as the final goal, I was led though the study of the natural sciences to other questions which prompted me also to take up geography, and this subject captured my interest to such an extent that I finally chose it as my major study. However, the direction of my work and study was strongly influenced by my training in natural sciences, especially physics. In the course of time I became convinced that my previous materialist Weltanschauung (a particular philosophy or view of life; the worldview of an individual or group)—for a physicist a very understandable one—was untenable, and I gained thus a new standpoint which revealed to me the importance of studying the interaction between the organic and the inorganic, above all between the life of a people and their physical environment.

Thus arose my plan to regard as my life’s task the following investigation: How far my we consider the phenomena of organic life, and especially those of the psychic life, from a mechanistic point of view, and what conclusions can be drawn from such a consideration?

In order to solve such questions I need at least a general knowledge of physiology, psychology, and sociology, which up to now I do not possess and must acquire.”

Boas goes on to state that he is going to following the migratory patterns of Eskimos.

Quotes | On
The following are quotes on Boas:

“Patterns of culture do not operate in accordance with the laws of physics. How are you going to prove in terms of the laws of physics that a certain ‘attitude’ exists within a culture? What is an attitude in terms of the laws of molecular interaction? What is a cultural value? How are you going to show scientifically that a certain culture has certain values? You can’t. Science has no values. Not officially.”