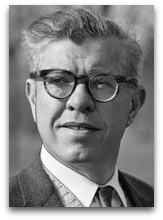 Big bang
In 1949, Hoyle coined the phrase that came to be applied to Georges Lemaitre's exploding atom theory of the universe, referring to it as "this big bang idea" during a BBC Radio broadcast. In 1967, together with Jayant Narlikar, Hoyle would go on to state: [6]

“In the ‘big bang’ cosmology the universe must start with a marked degree of thermodynamic disequilibrium and must eventually run down.”

Living black cloud | Davies
In 1957, Hoyle published the science fiction novel The Black Cloud, wherein he describes a large cloud of gas from interstellar space arrived in the solar system, which was said to be ‘alive’.

In the mid-1960s, Paul Davies, as an undergraduate physics student, read Hoyle’s The Black Cloud, during a time when he was ruminating on a variant of the anthropic principle, and became intrigued by Hoyle’s “living cloud” theory, about which he says the following in retrospect: [1]

Hoyle’s living cloud premise left Davies ‘baffled and vaguely disturbed’, leaving him questioning the ‘what exactly is life question’ and ‘when did it start?’ issue. Next, Davies’ PhD advisor (Michael Seaton or Sigurd Zienau) then gave him a copy of Hungarian-American physicist Eugene Wigner’s 1961 essay “The Probability of the Existence of a Self-Reproducing Unit” which purported to prove that a physical system cannot make a transition from a nonliving state to a living state without contravening the laws of quantum physics, arguing to the effect, according to Davies, that ‘something funny must have gone on when life started.’ [2] Davies supervisor then passed him Australian astrophysicist Brandon Carter’s circa 1970 paper on the ‘anthropic principle’ (a term he coined), which argues to affect that the laws of nuclear physics are fine-tuned to make carbon in stars, and hence predisposed to the development of life, and hence anthropocentric laws are made to favor the development of human life, in short. Davies then worked under Hoyle and with Carter for two years at Cambridge, from 1970 to 1972. During this period he chanced across a copy of Erwin Schrodinger’s famous 1944 booklet What is Life?, as we all have, which gave Davies the view that biological organisms can be explained by physics. This seems to have been Davies first indoctrination into the basics of the thermodynamics of life and his later circa 1980s gravitational entropy theory of life. In 1999, Davies, in fact, declared the second law to the "ultimate problem of biogenesis". In his 2003 The Origin of Life, Davies attempts to answer the question: [3]

“Is life written into the laws of nature, or just a bizarre accident, unique in the universe? How can a mix of non-living chemicals be transformed into something as complex as the living cell?

In 2006, Davies, in his The Goldilocks Enigma: Why Is the Universe Just Right for Life?, pictured adjacent, in which he argues that the earth, with its so-called "bio-friendly" conditions habitable zone, was fine-tuned by accident, and found in one of many universes. [4]

Life cloud
In 1978, Hoyle, together with Chandra Wickramasinghe, published Lifecloud, wherein the begin by pointing out the improbability of the "chemical evolution" scenarios that have been postulated, after which the conclude that life arose via comet. [7] Their suggestion that the main ingredient of interstellar dust is the bacterium E. coli, however, ran into ridicule. [8]

Boeing 747 | Chance-based creation
In 1980 or 1981, Fred Hoyle, together with Chandra Wickramasinghe, who co-authored Evolution From Space: a Theory of Cosmic Creation (1981) (Ѻ) and Cosmic Life Force (1990) (Ѻ), began to state that: “It is ridiculous to suppose that the random shuffling of constituent molecules could create life, and wrong to teach children [this] ... and that such an event is comparable to the “chance that a tornado sweeping through a junk yard might assemble a Boeing 747 from the materials therein.” (Ѻ)

“The chance that higher life forms might have emerged in this way is comparable with the chance that a tornado sweeping through a junk-yard might assemble a Boeing 747 from the materials therein.”

“The chances that life occurred are about as unlikely as a typhoon blowing through a junkyard and constructing a Boeing 747.”

This is known to some as the junkyard tornado (Ѻ) argument.

“When a problem remains unsolved, general opinion must be wrong.”

“The problem as it seemed to many scientists was to explain in terms of the real laws of physics (like Maxwell’s and Einstein’s) why entropy never decreased. Perhaps the most penetrating analysis of this question was given in 1909 by the German mathematician C. Caratheodory. His work did not commend itself generally, however, because it did not arrive at the wanted result. What Caratheodory proved was that either entropy could never decrease or it could never increase, but he couldn’t say which! To agree with the observed situation, it was still necessary to make an arbitrary choice.”

“A commonsense interpretation of the facts suggests that superintellect has monkeyed with physics, as well as with chemistry and biology, and that there are no blind forces worth speaking about in nature.”