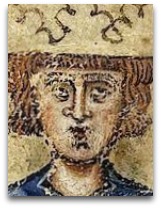 Religion | Questioning
Frederick, being educated under the shadow of a pope, made Pope Boniface VIII crazy for his "faith doubts". He questioned things such as the existence of angels, to the existence to peaceful coexistence god-demon; and doubted the immaculate conception (virgin birth).

The following gives a synopsis as to his atheism attribution: (Ѻ)

“Frederick at this time was chiefly solicitous about Sicily, towards which he was drawn by his Norman parentage on the mother's side, while the character of his own German people did not attract his sympathies. He had grown up in Sicily where Norman, Greek, and Mohammedan civilization had intermingled, at once strengthening and repelling one another. The king, endowed with great natural ability, had acquired a wonderful fund of learning which made him appear a prodigy to his contemporaries, but, although he was intimately acquainted with the greatest productions of eastern and western genius, his soaring spirit never lost itself in romantic dreams. He eagerly studied both the more and the less important interests of the political and economical life of Southern Italy. The funding of the University of Naples sufficiently attests his interest in education. He was an intelligent admirer of the beauties of nature, his love for which was intensified by his natural powers of observation. The unlimited resources of the physical world and its constantly multiplying problems increased the inclination of this sceptical spirit towards a thorough empiricism. In none of his contemporaries does intellectual subjectivism show itself so strongly and at the same time so one-sidedly. This desire to penetrate into the secrets of the universe, as well as his scandalous sensual indulgence, brought on Frederick the reputation of an atheist.”

Frederick II was even called "antichrist" and to have asked theologians, mockingly, while pointing to the sky, "tell me where you see god in the universe?" (Ѻ)

Three Impostors
In circa 1235, Frederick II is attributed to have penned an anonymous Treatise on the Three Impostors, the first so-dubbed Atheist’s Bible, on the three impostors argument, wherein he asserted that Jesus, Moses, and Muhammad were impostors; it, supposedly, began to circulate (Ѻ) in the centuries to follow; and or, was written by Simon of Tournai (1130-1201) or Bernardino Ochino (1487-1564), independently, or based on Frederick II's conjecture's.

Frederick II, in one experiment, among his may inquisitive experiments carried out on people, recorded by the monk Salimbene di Adam, in his Chronicles (Ѻ), he shutting a prisoner up in a cask to see if the ‘soul’ could be observed escaping though a hole in the cask when the prisoner died.

Language | Experiment
In a second experiment, on the basis that Adam and Eve were the first two humans, Frederick conducted a language deprivation experiment, wherein he had children raised by foster mothers and nurses that were allowed to bathe, wash, and suckle the children, but in no ways to prattle or speak with them; his aim, supposedly, was to discover what language would have been imparted unto Adam and Eve by god, i.e. whether they would speak the Hebrew language (which he took to have been the first), or Greek, or Latin, or Arabic, or perchance the tongue of their parents of whom they had been born. He found, however, that the children “could not live without clappings of the hands, and gestures, and gladness of countenance, and blandishments”.

Digestion | Experiment
To test digestion, in one experiment, Frederick II fed two prisoners, sending one out to hunt and the other to bed and then had them disemboweled to see which had digested their meal better.

Quotes | On
The following are Frederick II related quotes:

“Frederick II, this pestilent king, a scorpion spitting out poison from the stinger of his tail, has notably and openly stated that—in his own words—the whole world has been fooled by three imposters, Jesus Christ, Moses, and Muhammad, two of whom died honorably, while Jesus himself died on the cross. Moreover, he has dared to affirm, or rather, he has fraudulently claimed, that all those who believe that a virgin could give birth to the god who created nature, and all the rest, were fools. And Fredrick has aggravated the heresy by this insane assertion, according to which no one can be born without having been conceived by the prior intercourse of a man and woman; he also claims that people ought to believe nothing that cannot be proven by the strength and reason of nature.”

“Frederick II was man of extraordinary culture, energy, and ability – called by a contemporary chronicler stupor mundi (the wonder of the world), by Nietzsche the first European, and by many historians the first modern ruler – Frederick established in Sicily and southern Italy something very much like a modern, centrally governed kingdom with an efficient bureaucracy.”

Quotes | By
The following are noted quotes by Frederick II:

“How much longer can this deception last?”